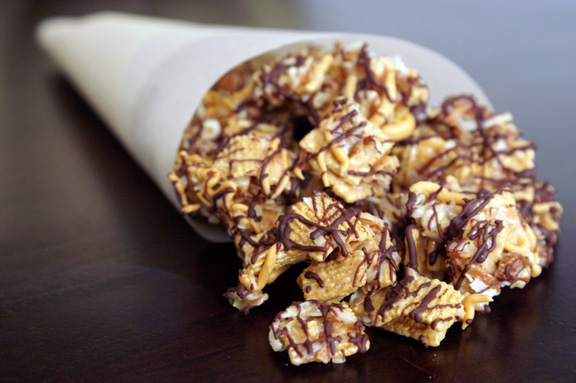 It’s true; I enjoy turning things into other things. This compulsion is why I made the cornflake chocolate chip marshmallow cookie into an ice cream. Or a favorite fall salad into a pizza. In my hands, beloved snickerdoodle cookies transform into ice cream vessels. Other times, I shove classic chocolate chip cookies into a muffin tin. Whatever. But it’s about time I take on something much more serious: turning the mythical seven-layer bar into a snack mix.

Fair warning: many of the photos in the links above, as well as some of these original seven-layer bars, are gross. I was just learning about light and food photography back then, and it basically looks like I took my pictures in a cave during a massive thunderstorm. Forgive my early blog photo attempts; the food is good, but the pictures don’t, in all cases, do it justice.

Seven Layer Bar, Magic Bar, Happenings, Hello Dolly Bar; it doesn’t matter what you call it; everyone has had (and probably loved) one of these. Seems as though if you’re like me, and grew up in the seventies and eighties (maybe even nineties?) in the US, you hold a sentimental attachment to them because your mom or grandma made them for you way back when, before any of us were concerned with pesky things like weight gain and cholesterol levels. Besides, when you ate one, you probably burned it off immediately playing outside with the neighbors in one of those super hot outfits we all had back then.

Initial Problem: I can’t seem to find a convincing excuse to make them year-round. For us, they were always reserved for the Halloween through Christmas months, and then they would disappear for the rest of the year. So it’s one of those holiday things, similar to anything made with peppermint and chocolate, that only seem appropriate for a limited time. It has yet to take on a chocolate chip-like freedom which allows it to be baked anytime, anywhere. I want to change that.

Solution: Make the seven-layer bar into a snack mix.

you heard me correctly: you can now snack on seven layer bars. guilt-free? No; I didn’t say that, because you will most likely eat the entire pan. Quickly. But my snack mix version seems much more appropriate for any time of year than a heavy bar.

Minor Problem: How to make this stick together and include the sweetened condensed milk, which is essential to the seven-layer bar. I mean, it’s one of the seven layers, and it’s literally what holds the entire thing together. Also, it needed a “baked” flavor without it being actually baked.

Solution: I used marshmallows to stabilize the sweetened condensed milk and kept the butter to a minimum, which gave it a bit more stick. To “cook” the mixture without having to actually bake anything, I microwaved it all together as you would for cereal treats. Did you know condensed milk turns into a caramel when microwaved enough? I did, because it’s how I make my millionaire’s shortbread (the homemade Twix bar) and it worked exceedingly well with the marshmallows and butter.

The coconut also needed a little work, because left alone, it’s sticky added to more sticky, and the flavor of un-toasted coconut is completely different from that of  toasted. To fix this, I toasted the coconut ahead of time, which is very easy to do, but does involve a little babysitting. 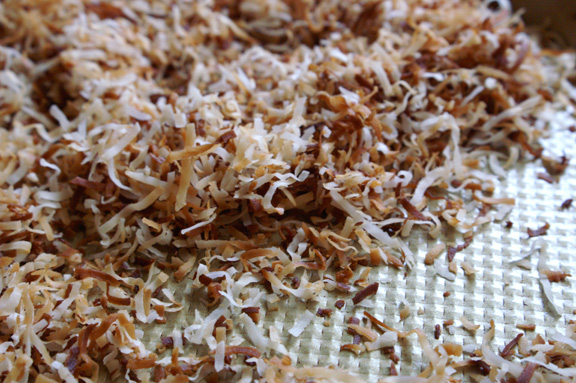 Major Problem: the melty stuff. Adding flaming hot caramel milk stuff to things like cereal, coconut, and pecans isn’t an issue; trying to add it to chocolate chips and butterscotch is another story. Add them too early, and they melt completely when you stir, turning your snack mix into a mess. Add them too late, and they won’t stick. Solution? not adding them at all, at least not in their “natural” chip-shaped state.

Thing i did not know: chocolate chips, butterscotch chips – and any “chips” really – contain stabilizers which makes them retain their chip form until stirred. These stabilizers also make it more difficult to melt chips versus chocolate in bar form, as the stabilizers tend to facilitate seizing and burning. I had no idea! I just assumed it was a “lesser” chocolate as compared to the bars, but no; chemicals are more to blame in this case. I had no trouble melting the chocolate chips, but the butterscotch chips were a different story. There’s more fake stuff in those, so like white chocolate, they are more prone to seizing up.

Solution: Add fat. More specifically, add a little butter to get things going. It smooths things out and makes the butterscotch less pasty and thick, which is essential to getting the drizzle thin enough to adhere to your crunch mix and subsequently stay put as you break it up to serve.

Although there are steps to this, I wouldn’t say it’s very labor-intensive, and nothing takes more than a few minutes. If you don’t have trouble melting two things simultaneously, you can save yourself a two steps (top and bottom) by drizzling the butterscotch and chocolate on at the same time.

I know at least one of you, at this point, will experience the epiphany that is “why can’t I melt the two together in the same saucepan?!?” Honestly, I don’t know why, but I haven’t personally tried it yet, so will it work? Anyone’s guess. Also, I really like the color of the chocolate over the butterscotch on this crunch, and although aesthetics aren’t of dire importance in a snack mix, it’s nice when it looks appealing. Mixing them together, for me, may make it a bit to…medium brown? I don’t know. If one of you does this, shoot me a photo.

I’ve talked about this enough: time to eat! I’m making this for my Halloween party, which – don’t get excited – involves maybe 7 people. Oh; I will be decorating like there are 50 people coming, don’t you worry. And making enough snacks for the entire neighborhood, the vast majority of which are not invited. It matters not.

As this is your crunch, I want you to make this your way. I’m giving you plenty of both the butterscotch chips and chocolate chips because I don’t want you to run out trying to drizzle every little piece. If you don’t use the entire 8 ounces of each, that’s okay; consider that “to taste.”

Spread out coconut on the sheet pan(s) and place in the oven on a middle rack. Toast for 5-8 minutes, tossing frequently so the edges don’t burn. You know you’re finished when your coconut ranges in color from light peach to dark brown. Remove from the oven and let cool completely. If you allow yourself enough time, you can use these pans (and the parchment) over again for chilling your crunch.

Mix some of your layers:

In a large (“large” as in “the largest bowl you can find”) heatproof bowl, add your cereal, toasted coconut, and pecans, tossing with your hands until thoroughly mixed. Set aside.

In a large, microwave-safe bowl (like a glass Pyrex), add marshmallows, sweetened condensed milk, and 2 tablespoons of your butter. Microwave on high for a total of around 4 minutes, stirring with a wooden spoon after 1 minute of cooking and every 30 seconds thereafter (or every time you see it start to really bubble up.) After 4 minutes have passed, you should see it has become slightly darker in color, and everything should be smooth.

Remove from microwave and pour immediately over cereal mixture, stirring hastily but gently with a rubber spatula (which causes the least amount of trauma to the cereal) until everything is coated in marshmallow goo. Work quickly, but not so fast that you miss getting everything incorporated. Unlike marshmallow-only cereal treats, this doesn’t harden up as fast, so you have a little more time.

Spread out your mixture onto your prepared lipped sheet pan(s), still lined with parchment I hope, and flatten gently into a semi-even layer. This doesn’t all have to be touching, because it’s a snack mix; a haphazard swath of cereal mixture is fine, but spread it out as much as you can so the butterscotch and chocolate drizzle gets to as much as possible. Place in the refrigerator to chill for 1 hour.

Drizzle the rest of them:

When your cereal mixture is chilled, melt your butterscotch by placing it in a small saucepan with your remaining tablespoon of butter. Heat on low, stirring frequently, until just melted. Remove from heat and let cool slightly, just to where you can easily handle it while in a plastic storage bag. that’s right: it’s squeezie bag time.

At the same time (or immediately following, as your butterscotch is cooling), melt your chocolate. I do this in a double boiler over just simmering water, stirring frequently, until just melted. As with the butterscotch, remove the chocolate from heat and let cool until it’s easy to handle and won’t melt a plastic bag.

Alternatively, you can do this with a large spoon, dipping it in your butterscotch and swinging it to and fro over your cereal mixture. Up to you. I like using the squeezie bag because you can control the drizzle and you don’t get big drips anywhere.

Get your cereal pans out of the fridge. Place half your butterscotch into your plastic bag and cut one small corner off. squeeze your butterscotch evenly over your cereal mixture until everything looks the way you want it to. Repeat the same process with half your melted chocolate. Place cereal mixture back in the fridge so your first round of drizzle can set up, about 1/2 hour.

Once your drizzle has set up and nothing is melty, remove pan(s) from the fridge again. Take your cereal mixture, which by now should be hardened into one movable block, and flip it over so the drizzle side is face-down on the parchment paper. Repeat your drizzle (butterscotch first, chocolate second) with the face-up side, trying again to get some butterscotch and chocolate on everything. Put this into the fridge for one more round of set-up.

After a half hour more, your crunch should be ready for action. Remove from the fridge and break apart into chunks, any size you want, to serve.

Although it fares pretty well sitting out for hours at a time, I like to store this in the fridge (airtight container, please) to keep it crunchy. Lasts for up to 3 days, but maybe longer; I couldn’t tell you, because we ate it. Sooooo…maybe next time i’ll hide a “control” portion in the fridge and test it out for storage time.