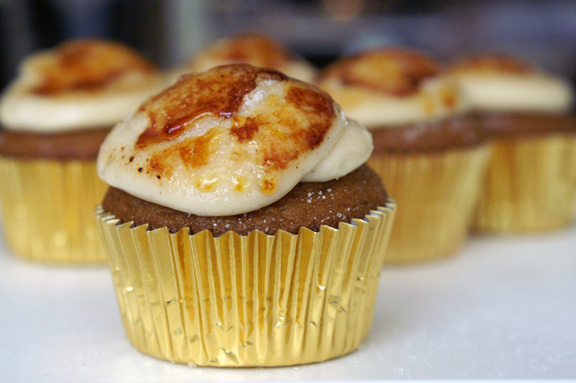 Once there was a girl who really loved fall. she also loved sweet potatoes and cupcakes. so she set out, on a cool autumn afternoon, to make the most magical cupcakes in the land. Now, this girl had never been one for following instructions exactly, so she decided base these tiny cakes on her recipe for vanilla bean sweet potatoes.

She changed the recipe, and set to work. 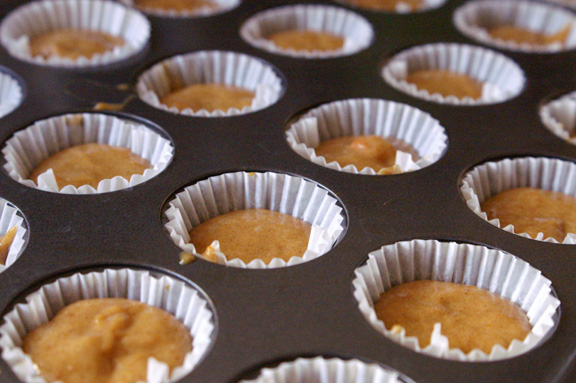 She filled muffin after muffin tin, large and small. 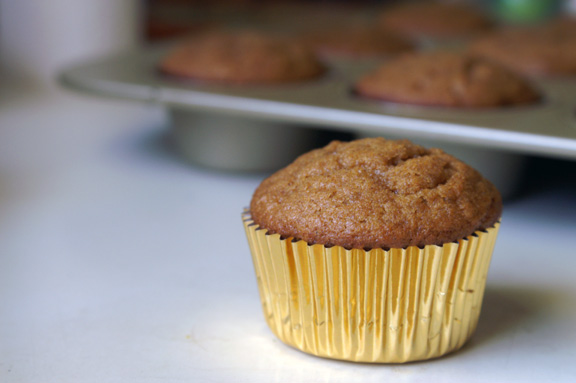 She baked and she baked, and finally, the tiny cakes were done. 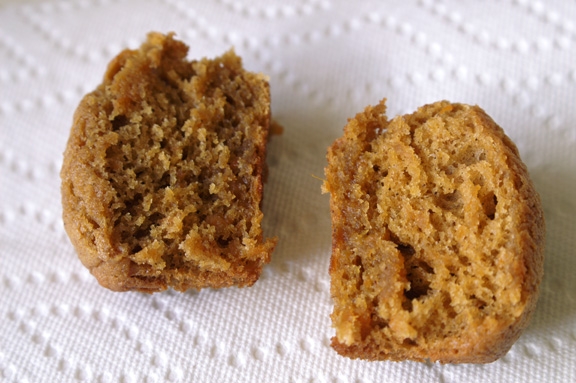 And as she stepped back to admire how lusciously dense and perfect these cupcakes were, how much these tasted like the best sweet potatoes ever, only in cake form, she remembered something. 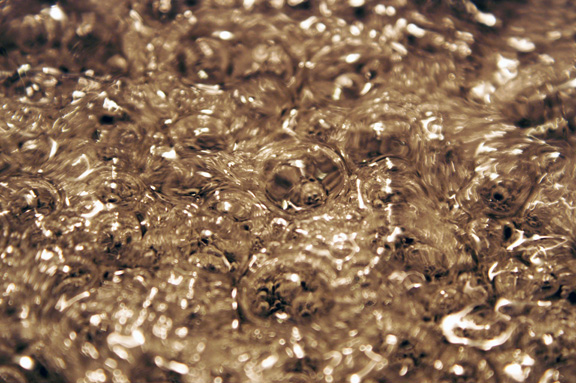 She sucks at making caramel. And she needed caramel to make the cupcake frosting perfect. “Well, here goes,” sighed the girl, as she remembered the 9 back-to-back failed attempts at honeycomb candy this past winter.  There was no successful outcome there, and the day had ended in her spending hours cleaning the kitchen of burned sugar. Lame. 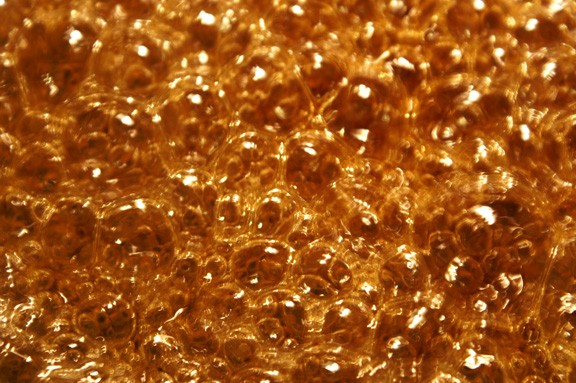 And then, the caramel started acting like caramel. She had never seen caramel actually work before in person, except when her grandma and mom made caramel corn.

And it did work; the girl actually, for the first time ever in her whole entire life, made a successful caramel. She was understandably stoked. 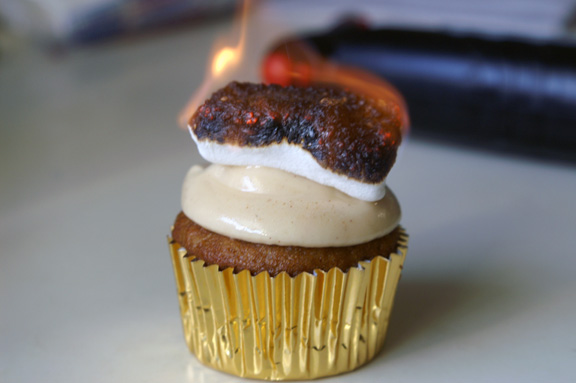 So stoked, in fact, that she thought she would do exactly as the recipe said, and top her cupcakes with fire-breathing marshmallows.

She was less than thrilled with the result. She was also less than thrilled that, as usual, she had managed to get Morrissey’s “Hairdresser on Fire” stuck in her head. Reader, you try it: just replace “hairdresser” with “marshmallow” and see if you don’t sing it all day long. You’re welcome. 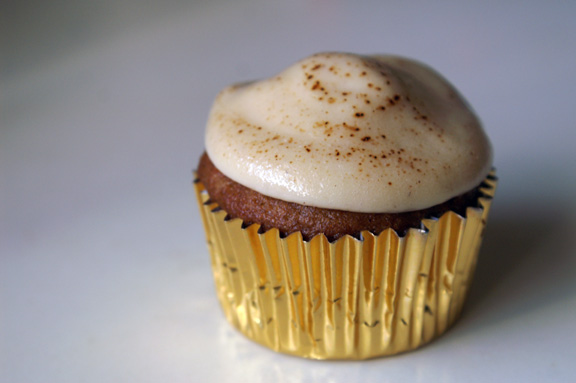 So she hatched a plan. Blowtorch in hand, she realized that there was probably a high enough sugar concentration in the cupcake frosting to set it on fire. And she was right; it was freckled and perfect. And because it was cold cream cheese, it was hard like a rock, and able to withstand direct heat without melting all over the place. 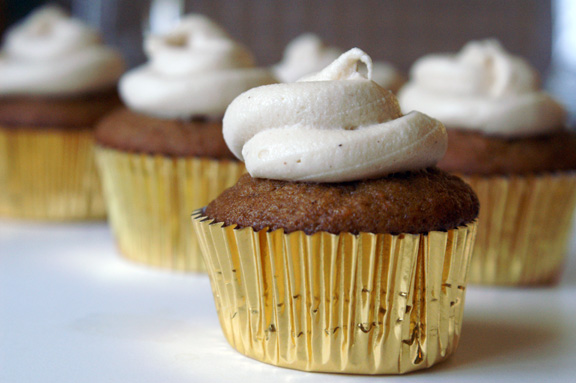 But she needed more drama. “Bring me the sugar!” she declared, to no one in particular. Mostly, she was talking to the fair princess (Wee One) and her otherwise empty kitchen. She swirled the cold frosting on to the cupcakes, factoring in the wee big of flattening which would occur upon brûlée. 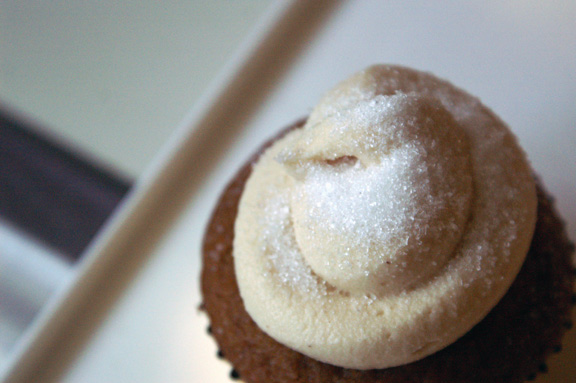 She spooned a small amount of sugar on top of the frosting spiral, and set fire to the cupcakes. Again. 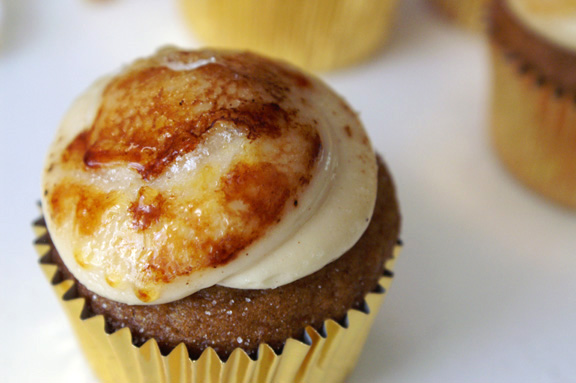 And at that moment, she knew she had indeed made the most magical cupcakes in the land. They glistened with sugar crust, under which lay a silky caramel frosting, but it what was underneath which made it the most spectacular. Because those sweet potato cupcakes? Fall in a foil wrapper. They were her new favorite autumn treat. 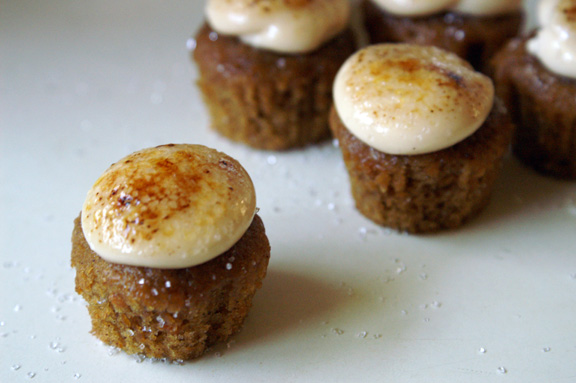 She even toasted the little ones. “These would be so great for Halloween parties,” she thought. 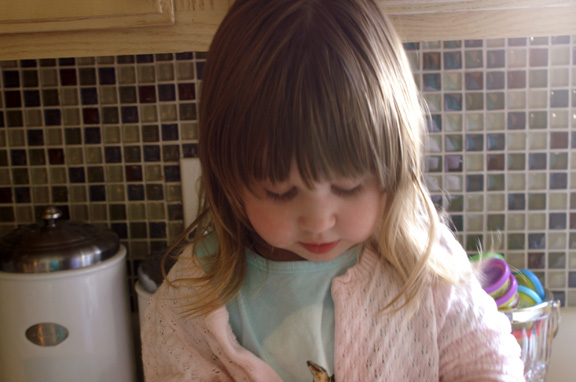 Alas, the fair princess had other plans for those little cupcakes. They would not be showing up to any parties this time; not if she could help it.

Inspired by my recipe for Vanilla Bean Sweet Potatoes, which even non-sweet potato fans beg for. The base recipe for sweet potato cupcakes and caramel cream cheese frosting comes from The Back in the Day Bakery Cookbook by Cheryl and Griffith Day. It’s one of my most favorite books to mess around with by now; I can’t wait to play with more of the recipes over the next few months.

for the vanilla cream:

*I’m guessing most of you have baked potatoes before, but for those who haven’t, here is my way to do them. First, start with the best organic sweet potatoes you can find. I’ve noticed a massive difference in quality between non-organic and organic sweet potatoes around here, and it’s the star if your cupcake. Scrub the whole potatoes with a vegetable brush to get the dirt off, dry, and poke holes in them with a fork; I do maybe 3 forkings per “side” (I pretend there are four sides). place them on the rack of a 400˚F oven, naked, placing a sheet of aluminum foil on the rack below the potatoes to catch the inevitable sugar drops. Bake for an hour, or until the potatoes are nice and tender. Let them cool for a bit and then fork-mash them. they don’t have to be perfectly smooth; in fact, I like a little texture to them.

In thinking about the way to best attack this, I suppose, as usual, you can do this spread out over two days or all in one. For either plan, I’d say make your vanilla cream, then your caramel (remember, vanilla cream goes into the caramel at the end). Start your frosting after that so you can pop it in the fridge to chill while you make your cupcakes (or make your cupcakes the next day). Make sure if you plan to brûlée, your frosting is very solid before you begin to frost.

Let’s begin with the vanilla cream:

In a small saucepan over medium-low heat, simmer your heavy cream and your vanilla bean. When the cream begins to bubble, reduce the heat to low, remove the bean, and split it with a thin, sharp knife down the center. Use the knife to scrape out as much of the pod as you can, placing the insides back into your cream and stirring. When finished, put the pod back into the cream (to get any extra vanilla flavor out), remove from heat, and set aside until it cools to around room temperature.

In a heavy-bottomed, fairly large saucepan, heat your sugar with 1/2 cup water over medium-high heat, stirring, until the sugar has dissolved. Bubble the sugar mixture, keeping a close eye on it and using a wet pastry brush to occasionally swoosh down sugar crystals from the sides of your pan. Turn down your heat to medium and continue to let bubble, not stirring, until the syrup becomes a medium-dark amber color, about 10-12 minutes (but use your eyes rather than my minutes as your guide). Swirl the pan occasionally to look at where you’re at in terms of color.

Remove pan from the heat and stir in the butter and the cooled vanilla cream. If you’re mixture begins to separate, that’s okay; it will come back together as it cools.

At this point, the easiest thing is to transfer your mixture to a stand mixer fitted with the whisk attachment, beating on low speed until the caramel is completely and utterly room temperature and looks like soft candy. if you want a little bit of an arm workout or something to do while watching TV, go ahead and use a hand mixer on lowest speed to beat your caramel until it starts to thicken. Then, take your bowl and sit with it, using a spatula to fold the caramel slowly, until it resembles soft candy. You decide.

Did you make your caramel and not mix it enough, only to find out that it cooled into something which looks like oily, grainy oatmeal? So did I…but i fixed it. If you had this particular trauma occur, scroll to the end, where i tell you how to save it.

let’s do the frosting now:

Beat the cream cheese, butter, vanilla, and cinnamon in a large bowl with a handheld mixer on medium speed until smooth and fluffy, about 4 minutes. Add the confectioners’ sugar a 1/2 cup at a time so you don’t poof all over the place, beating after each addition, and ending with everything being incorporated and smooth. Add your caramel and beat again until it has worked its way through and everything is creamy there are no streaks of caramel. Place in the fridge until well-chilled, at least 4 hours or so.

Preheat your oven to 350˚F and line either mini-muffin tins or standard cupcake tins with paper liners (or foil liners, as I did). I’ll give you baking instructions for both sizes.

In a large bowl, whisk together the flour, baking powder, baking soda, salt, ginger, and cinnamon and set aside.

In the bowl of a stand mixer fitted with the paddle attachment, beat the brown sugar and eggs together on medium-high speed until light and fluffy, about 3 minutes. Scrape down the sides and add the oil and molasses, beating until just incorporated. Scrape down the sides of the bowl again, add the sweet potatoes, and beat on low speed until just incorporated.

Keeping the mixer on low speed, slowly add your flour mixture, alternating with the vanilla cream, scraping down the sides as needed. Once it looks homogenous, remove the bowl and use a spatula to scrape through your dough for dry patches, mixing in as you go. There’s always something hanging out at the bottom; you know that by now.

Let cool for about 10 minutes in the pan, until they are cool enough to handle. Transfer them to a wire rack to cool completely. Remember, don’t start the frosting process until these cakes are completely cooled.

First, I’d look at the frosting photos above; it’s a good visual as to what you’ll be doing. I did the tidy swirls by placing my frosting in a plastic zipper storage bag, cutting a good-sized hole in one corner, and squeezing it out onto the cupcakes. If it’s resistant, knead it for a minute or so in the bag; your hands will warm it up to where it will come out easily.

Once your cupcakes have been frosted, use a teaspoon and sprinkle them with granulated or turbinado sugar, enough to where it covers the area you’d like to set on fire. Place them at this point on a tray which will slide comfortably and easily into your fridge. Make sure, while you’re thinking about it, that your fridge has a space waiting for your cupcakes.

Take your kitchen blowtorch and get to work, watching carefully as you do each one to make sure you don’t burn anything and that you’re getting most of your sugar evenly melted; a quick back and forth motion overtop is how I do it. Once finished, take your tray of cakes and gently slide them into place in your fridge to set for maybe an hour or so. This basically re-sets any frosting you melted while brûlée-ing the tops, so they won’t be messy.

The cakes will keep for up to 4 days in an airtight container in your refrigerator. Don’t be concerned with them drying out at all; in fact, these babies stay just as moist and delicious (and they almost  get better) as they chill.

SO: you broke your caramel. Fear not. If for some reason you don’t continue to work this caramel until it’s really done and at room temperature, you will have something which looks completely ruined. Chances are, it’s not. Put your caramel into a large, microwave-safe bowl and zap it, high power, in 15-second intervals, stirring a bit after each zap. You may want to add in a tiny bit (no more than a tablespoon) of heavy cream to help it along. Keep going until your mixture is hot and homogenous again, then stir like you should have the first time until it’s really done. I know you can fix this once, but you may not be able to fix it twice.