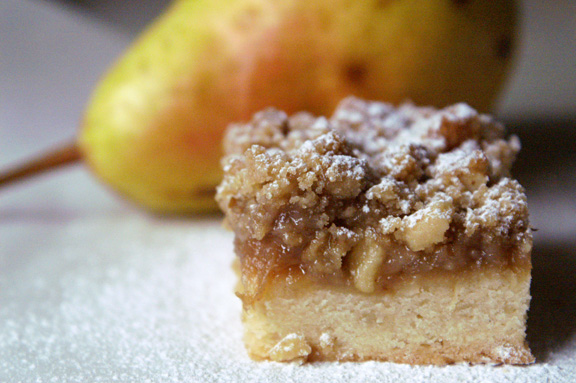 So we’ve all said our long goodbye (almost) to summer fruits, and have taken turns lamenting the disappearance of our nectarine, blueberry, and plummy friends. We will miss them; they never stay as long as we would like them to. We send them off with tears in our eyes, pressing our hand against the kitchen window. Goodbye, little fruits and vegetables. So long, sweet corn and tomatoes which make my home smell like a greenhouse. Fare thee well on your journey to next year, where we will see you again, glimmering and bright as always. Auf Wiedersehen, summer produce.

Because I’m done with you. It’s been chilly here and I am a fickle, fair-weather friend. Bring on the apples and pears and pumpkins and squash, farmers: I open my arms to you. Summer produce may be all vibrance and sizzle, but fall produce? It’s all subtleties. Sure, you have some sunset-hued apples in there, but for the most part, its matte-finished gourds and soft harvest goldens and greens. And that’s my kind of color scheme. 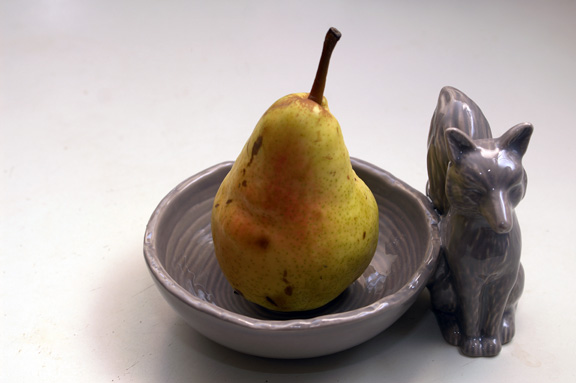 It’s Autumnal Equinox Eve Day today. No; it’s not an official holiday, but maybe it deserves some consideration, because it mean that Fall is upon us. So, evidently, are the pears up here. Bartlett and Bosc as far as the eye can see at the market. Comice, Concorde, Seckel and Starkrimson and I’m  getting sing-songy again; make it stop. I love a fresh pear, because during most months of the year, they are hard like rocks. Pears are the peaches of the cooler season; when they’re good, they’re sooooooooo good it’s indescribable. When they’re not? Gut-wrenchingly sad, because no one wants to bite into a flavorless orb that just resembles a fruit on the outside. That’s when you poach them and make this tart, as I did last year around this time. And pears (like their peachy counterparts) are sneaky like that. They may look gorgeous, but be mealy and almost sandy on the tongue.

But not right now: Go forth and gather the pears, my friends, because hopefully in your respective necks of the woods, they’re perfectly ripe as mine are. Make things with them. Those peach and nectarine recipes we all went nutso over this summer? I bet you could make those with pears too. That nectarine upside down cake I made would be spectacular with pears, and I’ll probably be making that very soon, just to see if I’m correct in that assumption. Also, I want to eat it. 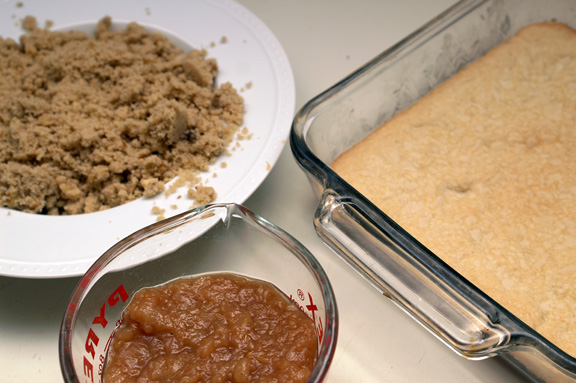 But first: I made you something. Created it all on my own, you see, and I get a little extra delighted when I can share something original with you. It’s inspired by a few things I have going on in my head right now. First, the new Baked book, Baked Elements: Our 10 Favorite Ingredients, dropped on September 1. Now obviously they chose this date because September 1st is one month and 11 days before my birthday, and they know I want this book, directly from their store, wrapped in parchment, and signed. It’s so great that they even calculated in standard shipping time, and also my delay-in-ordering-time, so it should arrive on or before October 12. So I’ve had the Baked guys on my mind as of late. 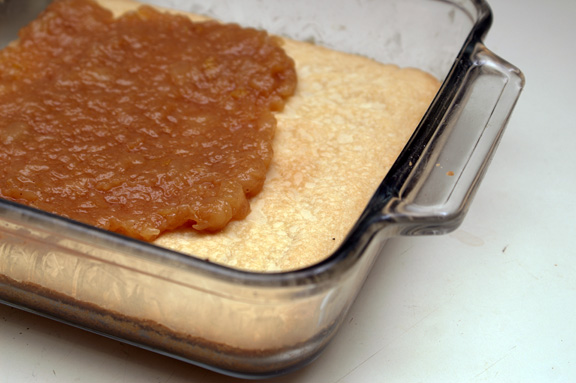 Secondly, I have had a fierce longing for fall fruits and the things which come from them. More specifically, I’ve been craving apple cider since early August. In fact, I will be making the Momofuku Milk Bar Apple Pie Layer Cake for my own birthday, because it just seems right. I feel compelled to do so, as if nothing else will work this year as a proper cake. The apple cider is here, so is the fruit, so I felt like it was time for a little dessert action. 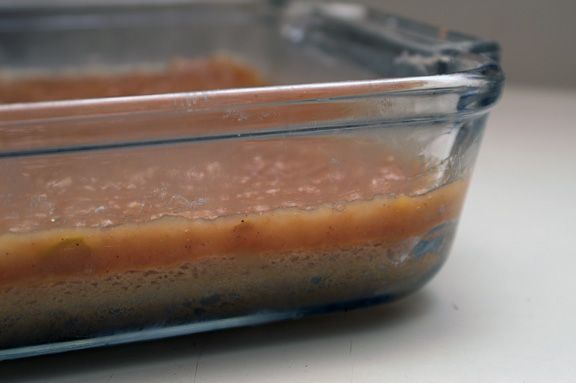 Finally, I’ve been perusing my old cookbooks, Baked Explorations being one of them, and finding all new things to make. It’s fun when you don’t see some books for a while; they’re like movies you haven’t seen in years. You remember the plot mostly, but some of the details, by now, are a little grainy. Writing the library sections for all of you has given me the pleasure of re-reading some of my old favorites. I’ve been wanting to branch out more with some of my recipes and make them even more my own, and so, with one of my favorite recipes from Baked, I did just that.

Introducing…the pear cider crumble bar. It’s from-scratch pear preserves, it’s apple cider, it’s fall spices, it’s a layered bar which you will be hopelessly unable to get enough of. Why? Because all three of the layers, when eaten by themselves, are delectable. But put them together? A Symphony of Autumn. You will almost immediately crave a chill in the air as you pop these out of the oven. This was inspired by Baked’s Rosemary Apricot Squares.

And guess what: you could also pretend easily that these are breakfast. Something about topping a dessert with a brown sugar strusel makes it seem very brunch or breakfast-friendly. Like a crumb cake, it fits just as nicely with coffee or tea as it does with a big hunk of vanilla bean ice cream. And, I’m sure you could interchange fruits on this. You’re not a pear person? try apples instead.

I have no concept of what it’s like to not be a pear person. 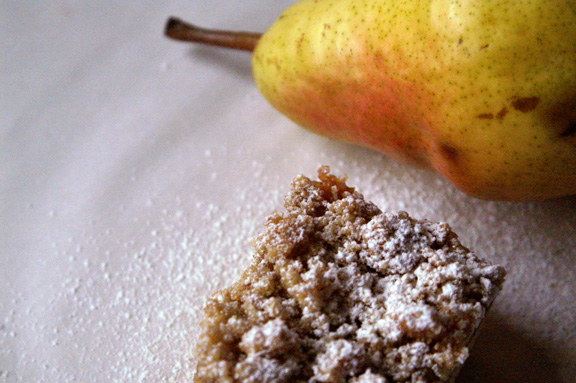 This, although it has steps (obviously; it’s layered), is not a difficult recipe to make. If you feel pressed for time or don’t like doing everything at the same time, this lends itself well to working on it here and there over the course of a day or two. Due to other things on my own agenda, I made these this way; first the crust in the morning, then the preserves later that day. I blitzed the strusel topping together the next morning, as my oven was warming. By the time I heard the beep, I had layered my bars and they were ready to bake. And did I pretend, on that chilly, rain-soaked morning that these were decent breakfast material? You bet I did.

for the short dough:

for the cider pear preserves:

for the crumb topping:

Efficiency = more fun in the kitchen: if you’re doing it the leisurely way (the Shannon method, as I like to call it), I suggest getting the dough baked and over with first, because it takes the longest time, start to finish. If you want to do it all at once, may i suggest working on your pears and dough at the same time, as they work like parallel lines and never really run into each other in a worrisome way. Save blitzing your topping for whenever you can spare a minute: either right before, or at some point along the way. You can place your topping in the fridge if there is any hold time to be had.

Butter an 8-inch square glass baking pan, bottom and up the sides.

In the bowl of a stand mixer fitted with the paddle attachment, beat the butter with the sugar and vanilla at medium speed until fluffy and light, 2-3 minutes. Scrape down the sides of the bowl. Turn the mixer down to low speed and add your flour in 2-3 parts, adding in your salt along with a flour addition. Turn the dough into the prepared baking pan and press into an even layer. If your dough gets sticky, add a little flour to your hands and continue to press until your dough looks even on all sides. Use a spoon to push down any flyaway dough from the sides. Place your pan in the refrigerator  for 45 minutes to an hour to chill out.

When you’re ready to bake, preheat your oven to 350˚F.

Bake your crust in the middle rack of your oven until it is lightly golden and evenly colored from center to sides, about 24-27 minutes.  Once it is ready, remove the pan from the oven and place on a wire rack to cool completely.

Huddle! if you’re doing all of this at the same time (crust/preserves/topping), leave your oven on at 350˚F.

Now, we preserve: (technically, we are not preserving anything.)

In a medium saucepan, place your pears, cinnamon, vanilla, cider, and brown sugar over medium-high heat. Bring to a low boil, stirring occasionally. Once your mixture begins to bubble, turn your heat to low, keeping everything simmering down for about 45 minutes or so, until your mixture has reduced, your pears are soft, and there isn’t a ton of loose liquid in the pan. Watch this carefully, especially towards the end.

Using a potato masher (or something useful for mashing), mash your pears gently into the rest of the mixture in the saucepan, leaving small chunks, until it is similar in texture to chunky apple sauce. Continue to simmer a few minutes more if needed, until most of the liquid is gone and you’re left with a spreadable, non-runny pear sauce, of sorts. Set aside to cool to, ideally, near room temperature.

In a large bowl, combine the flour, brown sugar, walnuts, and salt, using a whisk to incorporate them as evenly as possible. Add the butter cubes and work with your instrument of choice (fork, spatula, hands) to cut in the butter until the mixture resembles coarse, wet sand. I use my hands and press the mixture together to form larger crumb balls along with smaller ones; it gives is a nicer, more crumb-cake texture which I quite enjoy.

And now, the assembly:

If you don’t already have your oven on, preheat your oven to 350˚F.

You already have your crust baked, so evenly spread your cooled preserves over the crust using a large spoon or spatula, smoothing the top as you go. Using your fingers, crumble the crumb topping over top the preserves layer, making sure to distribute your crumbs evenly and all the way out to the edges.

Bake for 20-22 minutes until the crumbs are lightly golden (especially around the edges; you’ll see it first there) but not dark brown. Remove from the oven and transfer to a baking rack to cool for at least one hour.

I like to cut these in smaller squares, 2 to 3-bite deals, and if you do that, you can get anywhere from 25-36 out of these. for larger bars, you can get around 16. These will store happily in the fridge for up to 3 days, but be mindful that the crumb topping will have less of a crunch as the days go by.

Cutting trick: yes, these are amazing warm, but you know what’s more amazing? cooling them down first and warming them up a bit in the microwave later, and dousing them with ice cream. Here’s why: you get much prettier bars if you let the pear part fully cool off, just like how apple pie slices much more cleanly once it’s had some chill time. Act accordingly. If you don’t care that your crumble bars, er, crumble, go ahead and cut after cooling down on your countertop. For clean cuts, let cool on a rack for 30 minutes, then fridge it for at least 2 hours.