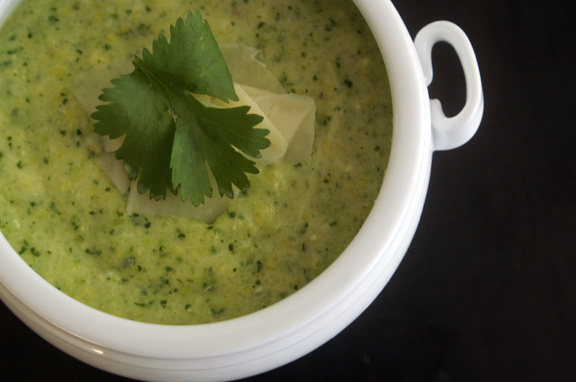 I feel duty-bound to tell you I’m skipping this week’s Farmers’ Market Monday post. You see, I’m up to my ears in homemade farm animal wall decorations, pennant garland, and other things which will transform my house into a state-fair-themed 2nd birthday party wonderland for my Wee One. I made this a few months back, and I feel like it’s got a quintessential summer feel and flavor to it none of us can get enough of right now. So while I try not to hot-glue-gun my fingers together, you enjoy this. It’s filled with fresh herbs, and you could even add some of that summer corn to the mix for even bigger corn flavor.

Because I can’t let summer go by without telling you about these delightful, summer sunshine-filled grits. I made these for myself for a few reasons. Biggest reason? I secretly love grits. I don’t advertise it, I’m not always proud of it, but I could scarf down some grits like nobody’s business. We never even really had grits growing up, so I can’t blame it on nostalgia, save for a smattering of restaurant brunches which had them. Geographically I have no excuses, as I don’t really live in a southern state, although it does border some of the northernmost ones. It’s just, simply, that I have a thing for grits.

Another reason I made these? I (not so secretly) love every single thing I’ve made from Andrew Carmellini’s American Flavor cookbook. It’s easily become one of my favorite cookbooks this year in terms of recipes and photos, and it’s got some great stories in there. Oddly, even the desserts in the book look amazing, where normally desserts in predominantly savory books seem a little afterthoughtish.

Mr. Carmellini is not ashamed of his love for grits; he doesn’t call this “cilantro-infused polenta,” oh, no, no. These are straight-up green grits, period. No fancy talk here. And they are killer in terms of flavor; super-herby, cheesy, and perfect with anything even closely resembling a Mexican dish. You can even eat this solo: I had mine with a side of fresh sliced tomatoes, and it made for a terrific summer meal. Yes, this is a warm dish, but I still wanted to sit outside and eat it, which is a telltale sign (for me) that it totally fits the season. 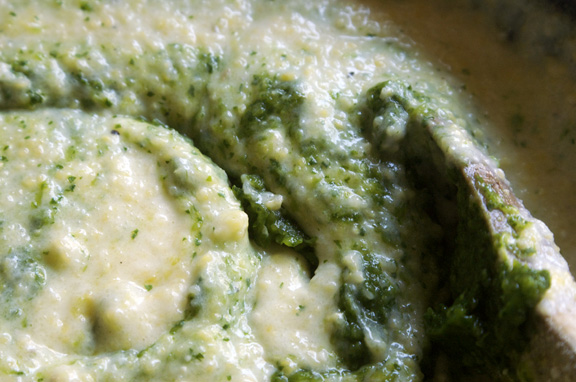 And don’t worry: yes, they are green, but not food-dye green; they have a nice green hue similar to that of a broccoli cheese soup, if that helps. Do try them; they would be great with other things, like barbecued chicken, flank steak, and shrimp (because I know some of you out there are shrimp-and-grits fans). If you don’t mind a little chopping and whisking, they’re very simple to make. I will warn you: feel free to cut the recipe in half if you’re only serving a couple of people: it makes quite a bit and will refrigerate for a day, but it doesn’t freeze well. So you’ll just have to eat as much as you can.

here comes my ever-present note: You should at least glance over the directions on your particular brand of grits (there are always instructions on the package) prior to making these, if only to look at the liquid-to-grits ratios and compare. This recipe works well with Bob’s Red Mill Polenta Grits and Anson Mills Carolina Whole Hominy Quick Grits, but every grit is a different grit. If the measurements are very different, alter the liquids accordingly.
Make those grits:

Combine the milk plus 2 1/2 cups water in a medium pot over medium-high heat. Bring mixture to a simmer. Stir in the salt and pepper.

Meanwhile, get your food processor out (if it’s not out already) and add your cilantro, chiles, and green onions to the bowl. This saves you from having to mess with it later when you should be attending to your grits.

Add the grits, whisking them in slowly and continuously until they are smooth, with no lumps. I work my lumps out by using my whisk to smash any up against the sides of the pot. Once your mixture is smooth, turn down the heat to medium-low and continue cooking, whisking regularly.

Combine the cilantro leaves, diced green chiles, and green onions in a food processor (if you ignored my instructions, which you may have) and pulse for a few seconds until everything is finely chopped.

When the grits have cooked through and thickened to a porridge-like, oatmeal-ish consistency (you’ll know, and it is very much preference how thick you want them), remove the pot of grits from the heat and add in your herb mixture. Whisk until everything is evenly green, add the butter, and whisk again until butter has melted into your grits. This should smell particularly awesome.

Whisk in the grated cheddar and parmesan cheeses until they are melted and evenly incorporated. Serve immediately as a side dish for just about anything, or do what i did, and just eat it for lunch by itself.

Now, i said this above, but these things don’t freeze, period. It gets watery and separates and it’s just not a pretty scene. So i suggest eating them all up straightaway, or maybe refrigerating them overnight. Like salsas and some soups, it’s really best eaten right there and then.