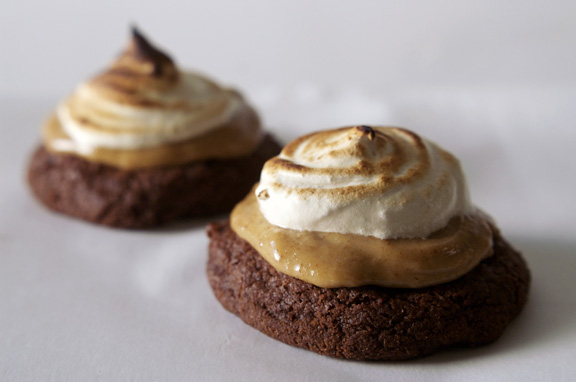 Of course you get a bonus chocolate chronicles post; it’s summer! Somehow in the midst of making these three types of chocolate cookies for you, I was also testing the Momofuku graham ganache for their white peach sorbet/graham ganache combo. My white peach sorbet, unfortunately, was quite gross. Not inedible, but I tend to gauge the desirability of something based on how much I want to keep removing it from its location and eat it, and I never had the urge to go back in for more peach sorbet. So that part of the recipe needs some fine-tuning.

However; this graham ganache is outstanding. Keep-poking-it-with-a-spoon outstanding. The sort of treat you think about and conjure up ways to use it just so you have an actual reason to have it in your fridge. You see, I’m a graham fan. I used to dunk graham crackers in milk when I was little (LIE! I still do it) and soak them until their breaking point. As in, they would literally sometimes fall into the milk glass if I didn’t time it right. This ganache, although much more sophisticated, carries that exact same flavor of a soaked-to-the-brink graham cracker. With none of the mess. 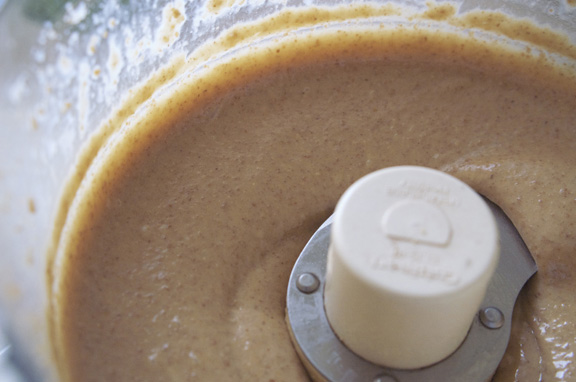 So this is what I imagined for you. By happy accident, I had the chocolate cookies going, so I dunked some of those in this.

And the mind wanders, so then I thought; why not do some marshmallow thing and slap that on there? Because that’s where my mind heads when summer vacation is on the horizon. S’mores. Only not normal s’mores, nooooo. Special s’mores.

At first I thought I’d just melt down some store-bought marshmallows to see how they would fare. The results were fine, but that’s sort of it; “fine.” I wanted “whoa.” Enter the fluff. 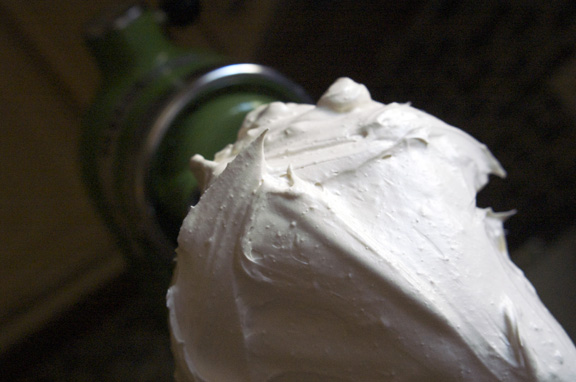 I made homemade marshmallow fluff to top them with, and believe me when I say it is so much better than just microwaving marshmallows and some butter together. And not hard. Well, this particular recipe isn’t hard, I should say; I had a “fluff-n-fail” with the first recipe I tried, but this one worked out perfectly, and it tastes loads better than the failed attempt.

So here’s my gift to you: Twisted S’mores. The cookie solid part is the chocolate, and the gooey inside is the graham. How fun is that. And as if that weren’t crazy enough for you, you get to pick which of the chocolate chronicles cookies you’d like to do this with. I tried all three types, and all three completely work with the graham/marshmallow combo. 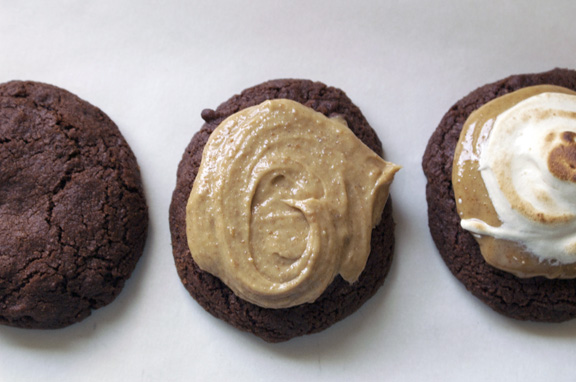 My favorite pairing (and the one pictured) is the Momofuku Chocolate Chocolate (Chocolate) cookie. The dark intensity of the chocolate works really well with the sweetness of the graham. However, since both of these (fluff aside) are Momofuku recipes, they pack a salty punch which I love, but some may find too strong. Cut down the salt in both slightly if you like this combination, but don’t want as big a kick of salt.

The Mexican Hot Chocolate cookies are strange and lovely with this, and the slight heat from the cookies cools down under all the ganache and fluff. Certainly this one is the farthest removed from a normal s’mores flavor, so proceed accordingly.

Finally, the Chocolate Chubbies, with their pleasing little walnut/pecan insides, give an added crunch to a traditional s’mores taste. Their nuttiness balances out the sweetness of the toppings, but doesn’t overpower them. I would suggest flattening these out a bit prior to baking, because their roundness makes topping them more difficult than a flat cookie. Adjust your cooking time down a few minutes as well, as your centers won’t be as voluminous and will bake a bit faster.

As for assembly, people; this is summer camp food, not Michelin star stuff here. Smack that ganache on the tops, then use either a spoon to scoop the marshmallow cream onto each one, or do what I do and fashion a squeezie bag from a plastic storage bag. Position it in the center and squeeze your fluff so it puffs out big and round. Toast the tops just a bit with a blowtorch (Scott: please let Katherine use the blowtorch), and if not serving immediately, I pop them back into the fridge to hang out until the party begins.

So there you have it: my “thank you” for having fun with the chocolate chronicles while I tested a few new chocolate cookie recipes. Here’s to many parties this summer where s’mores somehow seem necessary.

The cookies you can find all over this blog, and I’ll direct you accordingly in the recipe. Graham ganache adapted from the Momofuku Milk Bar cookbook by Christina Tosi.  Marshmallow fluff adapted slightly from chicagoist.com, and you can find the original recipe here.

for the marshmallow fluff:

for the cookies:
make the cookies:
Make your choice of cookie for the s’mores according to the instructions contained in the post you chose. Cool completely before assembly.
make the ganache:
Combine the graham crust, milk, and salt in a blender or food processor and puree until smooth and homogenous, about 2-3 minutes. Remove the blade, scrape down the sides and underneath where the blade was, and scrape the blade itself off. Put the blade back into position and puree again to make sure all the ingredients are evenly incorporated. Store in an airtight container and place in the fridge for at least one hour to set up. I find it’s easiest to work with this ganache if it’s slightly chilled; you won’t have as much meltiness to deal with when assembling the s’mores.
now; time to fluff it up:
In the bowl of a stand mixer fitted with the wire whisk attachment (or in a large bowl using an electric mixer), combine egg whites, salt and corn syrup. Beat on high speed for 5-6 minutes, or until the mixture has thickened and doubled, and medium peaks have formed. To (carefully!) test this, remove your bowl and turn the entire thing upside-down; the mixture should remain inside and peak-y. Not so brave? take a spatula, scoop a handful-sized amount out, and turn it upside-down. Once it reaches this consistency, reduce speed to low, and add vanilla and powdered sugar, mixing until incorporated. Store in an airtight container in your fridge for up to 5 days. For these s’mores, I suggest letting it chill in the fridge for an hour or so before working with it.
assembly time:
Have your cookies lined up and ready to go on a large plate, sheet pan, or baking rack; whatever you use, be sure it fits comfortably in your refrigerator. using an offset spatula or a regular butter knife or butter spreader, scoop out the ganache and spread it to your desired thickness onto each cookie.
Fill a large zipper storage bag with the marshmallow fluff using a spoon or spatula (go here for notes and pictures regarding my squeezie bag method). Cut a decent-sized (I used a maybe 3/4 inch diameter) hole in one corner of the bag. Positioning the bag upright and in the center of each cookie, squeeze out the fluff until it is the exact size poof you want it. My poofs were moderately sized in height (maybe 1/2 inch) and to keep them steady, I made the fluff poof slightly smaller in circumference than the graham ganache.
Once finished, place in the refrigerator so all the layers can set themselves back up again; after all, they’ll be facing the fiery intensity of a blowtorch soon. When you’re ready to serve, remove the cookies, ready your blowtorch, and torch the tops of your cookies (fluff part) until you scorch them how you like them. I prefer a light scorch, and it doesn’t take much to set one on fire, so practice is key here. After you torch them, serve immediately.
They will be gooey, they will be delicious, they will be everything you hope for. But they will be messy, so serve with copious napkins. Enjoy.
absurditieschocolatecookiesganachegraham crustmarshmallow fluffs'mores