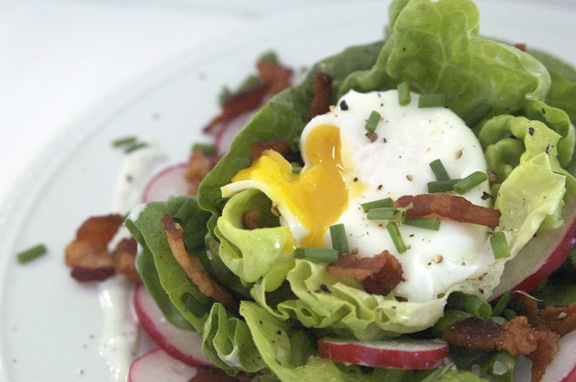 Miraculously, this post exists. I had a little meltdown late last week; it wasn’t a personal meltdown (surprising) but rather a technological one. It seems as though toddlers bearing large glasses of water and a high activity level don’t play well with laptop computers. Thankfully, we have an Apple store (the geeky one, not filled with apples) nearby and Mr. Table ran it up after I a) freaked out, b) cried, and c) assumed it would be at least 3 weeks until I would get it back, it would cost thousands to fix, and when I did get it back, everything would be erased. You see, people, I live by the rule that states if you worst-case-scenario every single problem, it will always turn out better thank you expected. In reality, my laptop had a short in the power input jack, it cost $50, and I had it back within 24 hours. How did I feel? Elated, and thankful I once again managed to ward off total devastation by merely overreacting. Mr. Table, you’re welcome.

I was a little worried I wouldn’t get to do Farmers’ Market Monday today. I didn’t want you to think I had fallen of the wagon of goodness already and succumbed to a sugar-filled lapse in judgement. I didn’t; in fact, this whole farmers market thing has me super excited, and it makes me even more thrilled to know you like it. Everything is so much more fun when I get such great input from all of you.

Because of the aforementioned meltdown and a Mother’s Day brunch to cook up on Saturday morning, I didn’t get a chance to try out a new farmers market this week. Too many time constraints and as you know, most markets aren’t open on Sundays. We do, however, have a tiny one (actually, there are two) nearby who are open 7 days a week, so I popped over to the closer of the two to pick up more radishes, a head of boston lettuce, and some chives. After grabbing some thick-cut bacon and blue cheese from a local meat market and swinging by my beloved up-the-street farm for some fresh eggs, I was ready to make you this week’s fresh thing: a bacon and poached egg salad with radishes and chives, all sitting atop some boston lettuce and tossed with blue cheese dressing and some white wine vinaigrette. 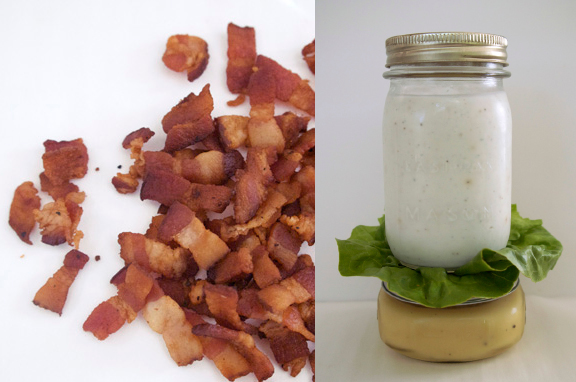 Obviously I made a mistake typing: did I say blue cheese dressing and some white wine vinaigrette? That’s two dressings; this is one salad. Correct: this is one salad, but a special enough one to need both dressings, made from scratch, which come together beautifully in this little number. Don’t be afraid: the vinaigrette is only there to add a little zing to the lettuce, and it’s light as air. The blue cheese is the powerhouse flavor, and a little goes a long way on this. I ended up thinning my blue cheese dressing out with a little milk, which you may choose to do as well if you’re wanting it a bit lighter.

This is, quite obviously, a hearty, satisfying salad. Go easy with the blue cheese dressing, or the combination of the egg and the dressing will be heavy. I’m thinking there are plenty of ways to modify this to make it healthier. For instance, I used a light sour cream in my blue cheese dressing, but you could use fat-free. A good quality 0% Greek yogurt (I like Fage brand) would work wonderfully as well. You could substitute turkey bacon, but you’ll lose some of that bacon-y flavor which meshes so well with both the dressings. For a slightly different take, you could use turkey breast, cut into strips, or skip the meat altogether and add some avocado slices. 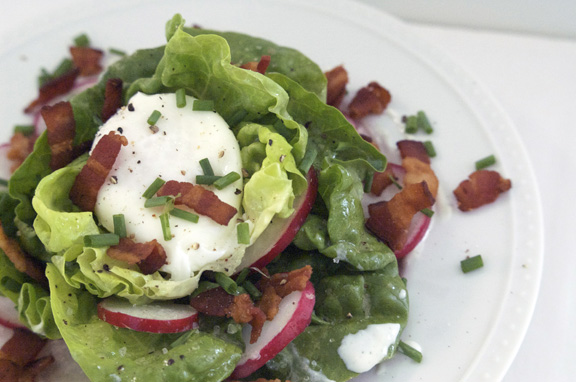 I made both my dressing and my vinaigrette the night before, and it took a few minutes and barely any effort. If you’re decent at eyeing up measurements, do it: there’s nothing in either one which can’t be fixed by tasting and adding once you’ve whisked things together. I didn’t use any sort of measuring cups or spoons, which is a pleasure I only get to partake of when making non-pastry or cake items. It’s freeing, and I suspect those of you who are more used to making desserts like I am rather than savory dishes would agree.

for the blue cheese dressing:

for the white wine vinaigrette:

A few things, before we begin:

I made both the dressing and the vinaigrette the night before making the salad, which i liked as it gave them time to meld their flavors together and chill. I noticed my blue cheese dressing was very thick, so I thinned it out with a few tablespoons of milk prior to adding it to the plate. Also, the original recipe calls for blue cheese as a topping as well as in the dressing; I felt it overpowered the other components, so I chose to leave the extra blue cheese out. If you want to add it back in, be my guest, but you may want to go a bit easy.

Put the buttermilk, sour cream, and lemon juice together in the bowl of  a food processor or into a blender. Blend until combined. Add the blue cheese and blend again until smooth and creamy (if you’d like it a little chunky, check it every so often until it’s the consistency you want). Season with salt and pepper, remembering that blue cheese is salty; I only added pepper, but do this according to your taste. Place in a sealed jar or container and refrigerate until ready to use. If your dressing is thick, add your tablespoon or so of milk until it reaches desired consistency.

In a small bowl, whisk together the vinegar, mustard, and honey. Season with salt and pepper. Slowly whisk in the oil until it emulsifies, which will take a few minutes. Place in a sealed jar or container and refrigerate until ready to use.

Cook the bacon in a medium saute pan over medium heat, stirring occasionally, until darker golden brown (not burnt, but crisped), about 10 minutes. This may largely depend on how “thick-cut” your bacon is, so watch it closely as it nears the end of cooking time. Transfer to a plate lined with paper towels to cool and de-grease.

Bring 1 quart cold water to a simmer in a large, deep saute pan. If your heat is not on medium-low, reduce it to medium low and break the eggs, one at a time, into a ramekin. Carefully slide each egg into the simmering water. Simmer until the whites are firm but the yolks are still runny, about 4 minutes. Remove carefully with a slotted spoon to a plate lined with paper towels and season with salt and pepper to taste.

Arrange your radishes and bacon on each plate as you see fit. Add your egg, one per plate, in the center of your lettuce cup. Sprinkle a few more bacon bits and your chopped chives over top for garnish, and season with salt and pepper as needed. Drizzle with a bit more of the vinaigrette if you wish, and ring the plate with a bit more of the blue cheese around the edge.