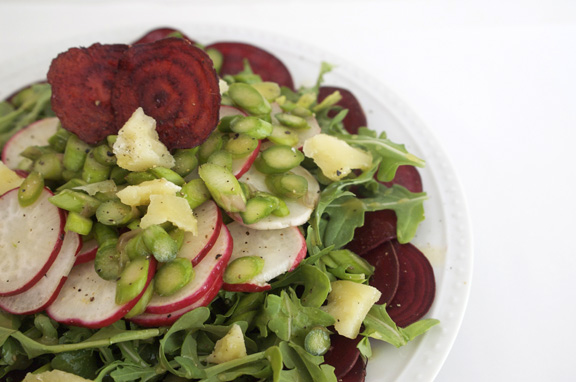 Welcome again to Farmers’ Market Mondays. I should also say thank you; thank you for getting super excited about FMM. I’ve already had a great time searching for recipe ideas I can build on and rummaging through tables and tables of fresh produce, and it’s only week two. It’s also really nice to get back in the habit of eating like I should be eating, with my refrigerator and pantry stuffed to the gills with non-sugar-related items. It’s about time, people. These last few months have been busy, and I’ve let my normally healthy eating habits fall by the wayside. It hit me a few weeks ago when I realized it was 10 am, and the only thing I had had to eat was 2 cups of coffee and some buttercream frosting I was busy making and testing. Embarrassing.

I’ve decided to try going to a different farmers’ market around the area each week for my little food journey. I don’t know what it’s like by you, but around here, some are big, and some are little. Some are brand new this year, and some have been there since seemingly the dawn of time. 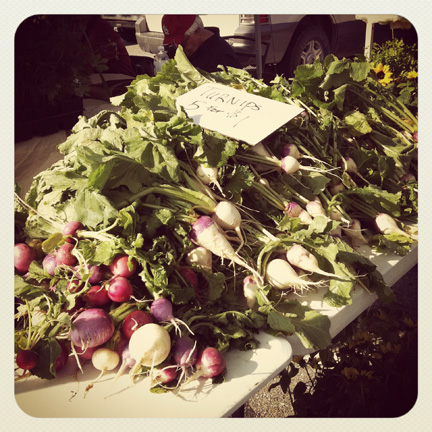 This week, I wanted to try a brand new one in the area: The Lake Saint Louis Farmers & Artists Market. It’s near where I live, and has only been open for a few weeks, but I’ve heard good things. It’s on the smaller end of things, but that’s to be expected from a brand new market. I was not disappointed; I found a big variety of exactly the spring vegetables I was looking for, and I even managed to pick up some peach jam and baked-that-morning focaccia before I left.

I had been thinking about what to make you this week, going back and forth about what veggies to look for, what type of thing I should do, and so forth. I was nervous I wouldn’t find everything I needed. I was wrong: I found everything and then some. So here’s what you get this week: a beautiful, spring vegetable salad with a fresh, easy honey-lime vinaigrette. Now, I warned you; these posts won’t be as long as the normal ones, but I thought you’d want to dive right into this salad. 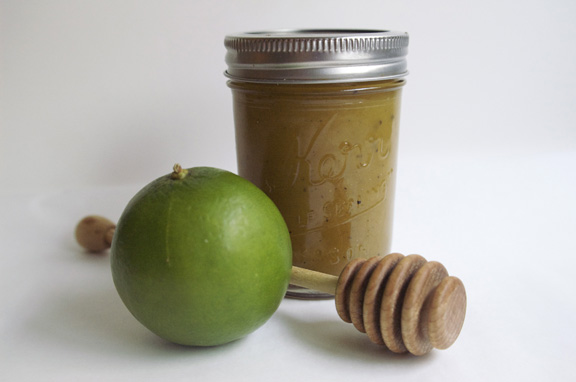 The honey-lime vinaigrette: four ingredients plus salt and pepper, if you want it, to taste. I even used a local honey i keep on hand at all times, just especially for things like this. Also the random hot buttered biscuit, but we’re not talking about that.

To make things even more idyllic than just shopping for everything directly from actual farmers, people, I sat outside on Sunday morning chopping the asparagus and mandoline-ing the beets. In the grass. On a picnic blanket. Chopping fresh veggies which, not days before, had been in the earth. I’d say it was because I wanted to commune with nature, but mostly it was because the Wee One really wanted to get outside for a good backyard runaround. And so we did. 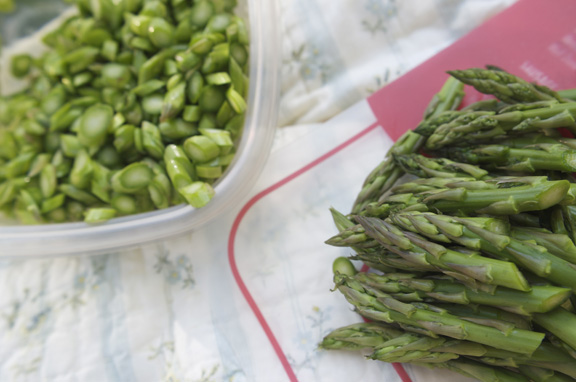 The ingredients which came from the market this week were asparagus, beets, and radishes. I purchased some lettuces, but I wasn’t super happy with their flavor enmeshed with the rest of these flavors, so the arugula (along with the limes) were purchased at a locally owned grocery store; in fact, the one I am at almost daily and have been shopping (with my mom) at since I was teeny-tiny. Both the honey and the parmesan cheese are produced locally as well. 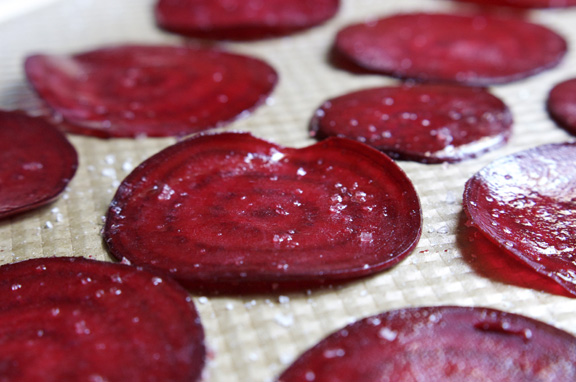 Is there anything prettier than a beet? I don’t think so. I’m a beet fanatic, and this salad gave me the opportunity to eat them in a way I never have before; raw. What you see above you is a little addition I like to call “wow; homemade baked beet chips are a crazy good salad topping.” They are completely optional to the salad, but were a wonderful replacement for a crouton. Word of warning: they don’t stay crunchy indefinitely; I noticed mine were softer (yet managed to maintain their salty deliciousness) by nightfall.

If you do choose to make them, I suggest watching them closely. I sliced my beets almost paper-thin for the salad and for the chips, and I loved them that way. Variation in thickness, will result in different cooking times than what I’ve given you below. Thankfully, beet chips give you some good warning signs before going from crispy to scorched, so please don’t just throw them in and walk away from the oven, unless you want to do them twice. Or unless you’re some sort of beet chip savant, in which case I suppose you can do what you want. After all, who am I to say anything to a beet savant. 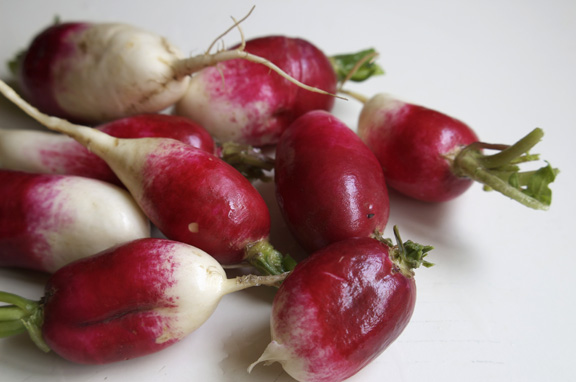 Another tip: don’t slice your radishes until it’s time to assemble the salads. They only take a few seconds, and slicing them ahead of time can lead to weird discoloration. To keep them bright and white, run your knife through as many as you need right before serving.

I know I’ve said this before, but it is almost laughably difficult for me to give quantities for salads. Why? Because I think you could make ten salads for ten people, and everyone would like theirs a little bit different from the person next to them. Please use my measurements as guidelines and not law; rules are meant to be broken. Recipes which don’t involve specific fat-to-flour ratios are meant to be toyed with. Toy, people; toy.

Adapted for several different spring salad recipes. If I had to name my biggest influence, it would be this salad from Bon Appetit.

for the honey-lime vinaigrette:

*note: if you’re not making the beet chips, that’s completely okay, but you’ll have extra beets. An alternative: thinly slice all but one of your beets, then roast it with olive oil and some sea salt to use for a different meal. I’m just not into wasting beets, because I love them.

**another note: if you’ve never chunked off parmesan, it’s easy. find a thin, pointy knife, place the big parmesan on a piece of parchment, and drive the knife gently downward into the cheese, pulling sideways to “pull” chunks off as you go. You’re going for rustic, here; not uniform chunks. Don’t like parmesan? A dry, crumbly goat cheese would be lovely in this in its place.

take your sliced asparagus and throw it in a bowl which will fit it, squeeze the juice of one lime over the asparagus, cover, and refrigerate. I thought this did a nice job of holding the asparagus without drying it out, and it lends a nice flavor to it once the salad is ready to assemble.

in a medium bowl, whisk together the lime juice, honey, and cumin. Drizzle in the olive oil slowly, whisking continually and allowing it to emulsify. Add salt and pepper to taste, and chill in the fridge for at least 1 hour.

Preheat your oven to 350˚F. Take as many beet chips as you’d like (I reserved about 3/4 of a beet because I wanted some to snack on, but you do as many as you think you’ll be using) and place them in a bowl. Drizzle some olive oil over them, and using your hands, toss the beet chips carefully to coat. Remember, beets will dye hands, so I suggest using plastic gloves. Place them on an unlined baking sheet and sprinkle with sea salt.

Place on a middle rack in your oven and bake for approximately 15 minutes. I can’t say it enough, but this truly depends on how thinly you sliced your beets; please refer to photos above for an example of mine. if yours are like mine, 15 minutes should work. At the 10-minute mark, check them. Watch them carefully at this point. When they’re ready to be done, they lighten and get ruffly around the edges. Remove them immediately. Beet chips will crisp up when cool. Allow to cool completely before using on your salad.

Here’s why I want to warn you about beet chips: I totally screwed my first batch up because I used what I thought would be a reliable recipe, which had me placing baking sheet upon baking sheet, baking for 20 minutes, then baking for another 20 minutes. When I removed the baking sheet at the 20-minute mark, they were black as night. Burnt beyond recognition. This, combined with what I know about how long whole beets can take to roast, is why I can’t warn you enough to watch your chips. You’ll thank me silently when your kitchen doesn’t smell like burnt toast.

Really, this is about assembly and that’s it. Slice your radishes thinly with a knife into disks; set aside. Take your raw beet slices and arrange them on the bottom of your plate, covering out ward almost to the edge. it’s basically a plate of beets on your plate. Throw a handful of arugula onto the top, just so you can see the edges of the beets.

Drain the excess lime juice from your asparagus, toss the radish slices in, and toss together until mixed. Pile as much as you’d like on top of your arugula. Add some of the parmesan chunks over the top.

Retrieve your honey lime vinaigrette from the fridge and shake, shake, shake until re-incorporated. drizzle using a spoon over the salad (a little goes a long way) and season with sea salt and fresh ground pepper to taste.

Makes 2-3 lunch salads. Again, this completely depends on what you define as “fulfilling” in salad terms, and how you pile your ingredients.