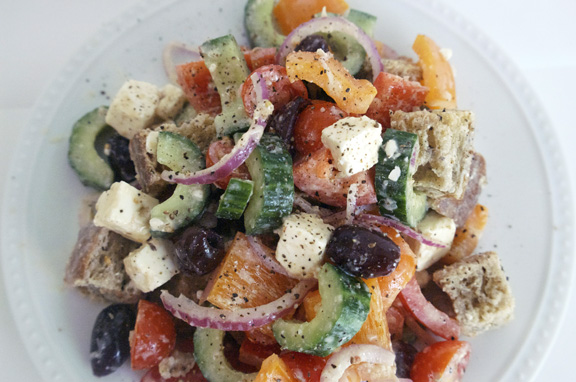 It seems as though there’s a general theme out there right now with my fellow baking (and cooking, sometimes) bloggers: we feel poofy. We could lose a few pounds. We need to eat better. And isn’t that like, exactly what happens to everyone around this time of year, right? It’s warmer, winter’s officially over, some of us are scheduling our summer vacations and thinking “holy, crap; I have to actually wear that swimsuit in public at some point.” And I have an almost-2-year-old. What does that mean? You guessed it; more photos than some countries allow anytime she’s in close proximity to my mother. What it also means is that when my wee one is photographed, she is often photographed with her mother’s thighs in the frame. *sigh*

I’m right there in the feelin’ pudgy boat with you. A friend of mine calls it their “winter coat” of extra weight which seems to accumulate gradually over the cooler months. I know what my issue is: you’re looking at it. Not this gorgeous salad, silly; this whole entire blog. It is sugar-filled and sprinkle-laden, and guess what; it all sits here at my house, staring at me. And when you return from shopping and realize that on your way to put away groceries, you’ve passed 50 confetti cookies, a birthday cake, and a batch of cornflake chocolate chip + marshmallow cookies you whipped up because a reader recently had an issue with them so you made them just to see if you still could, you know you have big problems. 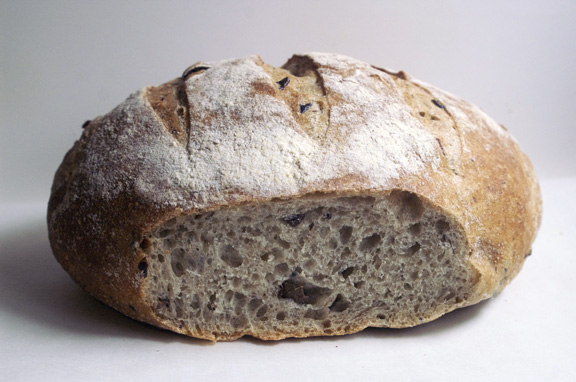 Once again, as is typically the case this time of year, I need to switch up my eating habits to eliminate cake as a viable breakfast or lunch option. I need to remember that “taste-testing” doesn’t equal “no calories.” It’s spring: farmers’ markets are in full bloom and stocked to the hilt with fresh, gorgeous produce, and I happen to love fruits and vegetables and fresh, non-butter-filled things. So: as a weekly reminder to myself, and because I like sharing things with you people, I’m starting a new summer vacation series. We’ll call it Farmers’ Market Mondays, and I’ll be challenging myself to make you salads and other fresh things using only items I find at my local farmers’ market the previous weekend.

There will be times I need to add things I didn’t just purchase; dried herbs, for instance, and probably some dressing ingredients like olive oil, etc, which I keep at home. But the vast majority of the ingredients will be directly from the farm to my table, and from my table to this blog. We have some fantastic local stuff around here too which you may not be able to get in your areas, but there will always be close substitutions given for it. For instance, I’m using one of Companion’s craft breads, the rustic olive loaf this week in my salad, but any dense bread (and if you can find one with kalamata olives in it, bonus!) will do.

And fear not: you’ll still all the weird, sugary craziness you’re used to from me. This will be an extra, if you will; an added post every week. Some may be short and sweet, some may be filled with market adventures, but you’ll always get something fresh and easy.

First up: quite possibly the love of my salad life, the greek panzanella. If you love greek salad and big fat homemade croutons, this one will be like heaven on a plate. And by all means: if you’re worried the bread is too much, this is delicious with only the veggies as well. It’s a mashup of sorts: The salad recipe itself is an Ina Garten one, but I felt like the dressing which accompanied it needed a little more “oomph.” Enter Mr. Andrew Carmellini, my  recently-appointed King of the Salad.

Why does Mr. Carmellini get such an auspicious title? Because he deserves it. So far, I’ve made both his cole slaw and his smoked potato salad from the American Flavor cookbook. They have been awesome. Perception-altering, flavor-bursting works of salad art. I was beside myself with both of them, and it was in large part due to the flavor combinations in his dressings for each. They’re not abnormal, but you can taste in a very real way the care he takes in assembling just exactly the right ingredients for his sauces. They’re not just an afterthought for him: they’re what makes or breaks the dish. And he makes it every single time. It’s like taking an extremely classic, recognizable thing, and then making it 20 times more magnificent than the best version of if you’ve ever had.

I hope he doesn’t mind the title, or my intense love of his salad creations. It’ll be awkward if he calls and is all “hey, restraining order,” and i’m all “whoops, my bad, I just like you” about it. 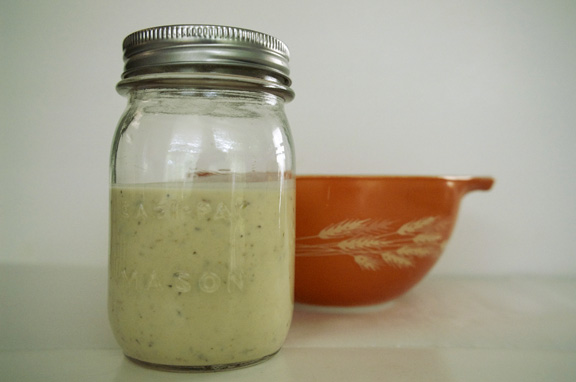 I knew the greek dressing, also found in American Flavor, would not let me down. And it didn’t. I’m very picky about salad dressings; not picky in the way that I don’t like most of them, but rather in the way that to love it, to really crave it repeatedly, I need it to be SO RIGHT ON. Happily, this dressing meets and (exceeds) that criteria.

First, it’s incredibly easy to make: I didn’t have to buy one thing from the market but limes and shallots: I had the rest here. You measure it out, whiz it up, and chill it down until you’re ready to use it. I used my chill time to chop my veggies and toast my croutons.

This salad is completely customizable. Too much bread? Leave the croutons out, or only use a few. It will be less “panzanella” and more “salad,” but it’ll still taste great. You don’t like on of the veggies listed, or have a favorite you’d like to include? Go right ahead and add or subtract as needed. Don’t love feta cheese as much as I do? Substitute chunked-up parmesan or asiago cheese. The beauty of salads is that you can throw in exactly what you want, slap some dressing on it, and have a fabulous  meal. 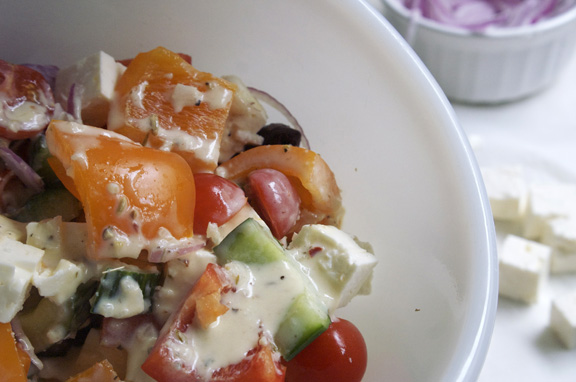 I find that assembling a panzanella-style salad works best when you do things in a specific order. it’s a fresh crouton thing; they tend to absorb dressing quickly, especially if it’s poured directly onto them. How I do it is to simply gather all your chopped up veggies in a bowl, add the desired amount of dressing, and toss. Add your cheese (if using), and toss again. Finally, add your big fat croutons, swirling them around inside your salad until everything is evenly covered. Throw on to a plate, and serve.

Sometimes, if I’m making this for a group and not just myself, I’ll toss everything but the bread in the dressing and then add the croutons immediately before serving; it helps keep their crunchiness and their structure intact.

Salad/veggie part adapted from How Easy Is That? Fabulous Recipes and Easy Tips by Ina Garten. Greek dressing adapted from American Flavor by Andrew Carmellini.

*note: if you’re using parmesan instead of feta, you don’t have to dice it. take a narrow, pointy knife and stick it vertically into your cheese, chunking off smallish bits of it by pulling your knife away from the cheese. it’s pretty and rustic-looking; not meant to be perfect.
making the dressing:

Heat the olive oil in a small saucepan over low heat.

Add the shallots and let them cook for a minute or so, until they just start to soften. Add the garlic to the saucepan and cook the mixture for another minute, until the garlic softens up and releases its aroma. Remember: burned garlic is gross garlic, so watch you pan carefully and don’t let it overcook and stir constantly.

Pull the pan off the heat and stir in the coriander, fennel, cumin, red pepper flakes, and oregano. Add the mustard and stir everything together well. Scrape the mixture into a small mixing bowl. It should smell fantastic – a mustardy, spicy, garlicky mix.

Add the lime juice, yogurt, and 1/4 cup of water (or slightly less, depending on how thick you want it), and whisk everything together well. If you want to, throw the mixture into a food processor and whiz it all up together: Ifound this made mine slightly thicker because it emulsified the olive oil and it eliminated any chunks I had from my sub-par dicing skills. Put the dressing in the fridge to cool it down before serving it. The dressing will keep in your fridge for around 4 days. I suggest storing it in a glass jar (as shown above) so you can easily shake before serving. And it looks nice.

moving on to the salad:

Toss your cubed bread into a large bowl. Drizzle with olive oil (don’t drown it; drizzle is the operative word there) and mix with hands or a large spoon until evenly coated. Add a little kosher salt and ground pepper to the mix, stir again, and spread out onto a baking sheet lined with parchment paper.

Bake in the oven for around 15 minutes, tossing around once at the 10-minute mark. The timing on this is very bread-dependent: after that 10-minute toss, check your bread/toss your bread every five minutes until it has reached desired doneness.

Place the cucumber, bell peppers, tomatoes, red onions, and olives in a large bowl and toss together. Add the desired amount of dressing and toss lightly until evenly coated. Add cheese and toss again. Add your cooled (they can be slightly warm, it’s ok) croutons and toss again until dressing is evenly incorporated. Season to taste with kosher or sea salt and ground pepper and serve.

I would say this makes 2-3 good-sized meal salads, and a lot of that is based on how much bread you use or if you’re using it at all; it gives the salad its volume. If you’re not using the bread in the salad, you may want to up your veggie use.