seven-layer bars of my youth. 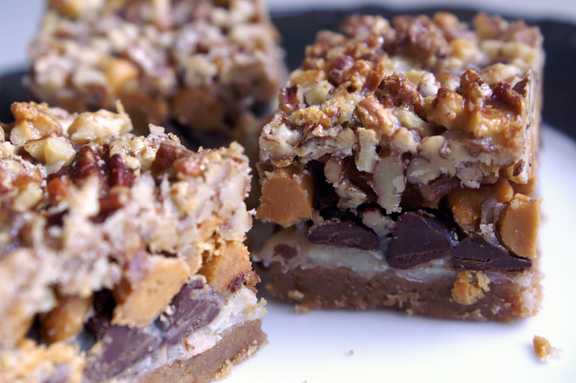 So…seven-layer bars. I had all but forgotten these existed until recently. My mother used to make these bars when we were kids, but past the age of maybe 12, I just don’t remember having them. Surely she moved on to more classy dessert things. this may have been the age where she switched to the Omnipresent English Christmas Toffee.

First let me say that this may be a deep-seated source of bitterness for me. You see, i never much liked The Toffee. Don’t get me wrong: it is fine. it is chocolate bottom layer, toffee top layer, and covered with chopped pecans. You break it up into little pieces like tiny bark and it, to most people, a fantastic indulgence around the holidays. 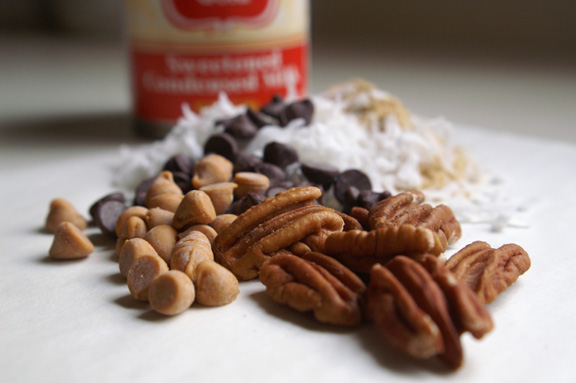 However: my memories of The Toffee may be as they are because of the work which went into it. Every year, immediately following Thanksgiving, our pantry would be PACKED with chocolate bars and bags of pecans…and you just knew it was almost time. And you started to fear for your life. Why? Because although I have never made this myself, i know that there is something about The Toffee recipe that is tricky, or takes a delicate touch, or involves cautiousness. Because every year there would be the inevitable Ruined Toffee incident. This incident would be met with cursing and some tears of frustration, and would culminate with a rush trip to the grocery store for more candy bars and pecans. This happened EVERY YEAR.

So, I do not make The Toffee. And even though people rave about The Toffee, I do not care for it. My husband, a newcomer to The Toffee fanclub, wonders why I don’t make it. 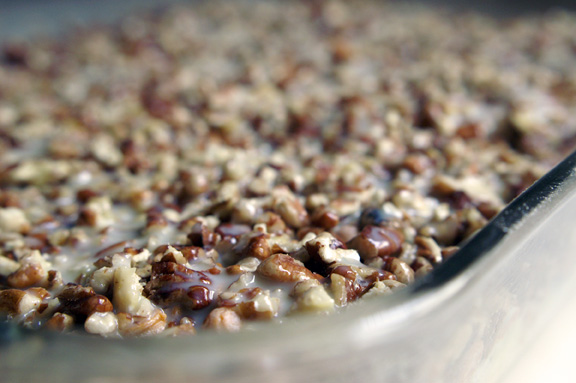 It is no coincidence that a few years ago, when The Toffee made a noticeable comeback in our Christmastime traditions (thanks to our family getting to all spend christmas together once again), I remembered there used to be something before The Toffee began its annual torment on my mother. And this was it. It’s ridiculously sweet, so think small when you slice them into squares. It is, let’s face it, sort of a trashy dessert. you dump one ingredient on top of another, on top of another, pour a can of cavity-inducing sweetened condensed milk over the whole thing, and stick it in the oven, where it magically melts just enough to stick together but not enough to lose it’s bumpy individuality. It may not be sophisticated, like The English Christmas Toffee, but this is my official christmas candy.

Taken from numerous searches for ingredients and advice from my mother. voila.

Preheat oven to 350˚. Position rack in the middle of the oven. Butter bottom and sides of a 13 x 9 pyrex glass pan.

Measure out 2 1/2 cups of graham cracker crumbs and discard the rest. Mix crumbs and melted butter in a bowl until it resembles ocean-soaked sand. Using the bottom of a measuring cup, press evenly into the bottom of the pan, pushing down any errant perimeter crumbs with your fingers.

cover the whole dang thing with the sweetened condensed milk.

Bake for 25-30 minutes or until you can’t take it anymore. Set on a rack to cool, which will take too long and you’ll want to try a sample (just to see if they turned out okay) after around about 20 minutes. After you test your final product, either continue to cool on the rack or wrap tightly with plastic wrap and refrigerate for at least an hour before trying to cut.