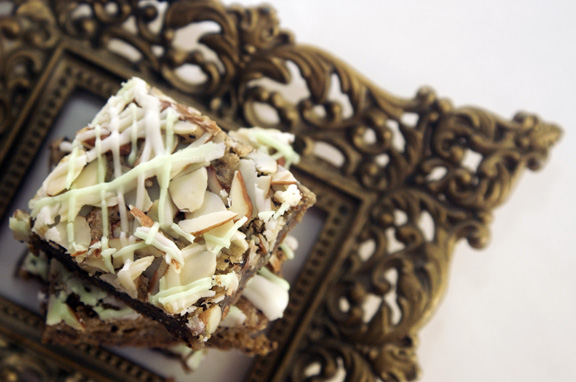 I don’t know why this is, but every year, I manage to miss Mardi Gras, and any food associated with it, almost entirely. It’s not that I don’t like the holiday, although I’ll admit I think I’ve only participated in any sort of Mardi Gras festivities once or twice that I can remember. It’s more that there’s simply so many holidays back-to-back-to-back right now, all of them semi-little, that this one slips through the cracks. What made me remember Mardi Gras this year was Brianne’s pretty little King Cake; those are so festive-looking, and it reminds me of a bakery very near where I used to live who was famous for their King Cakes. And hiding a baby in a pastry is all right in my book.

So Mardi Gras slid right by me, and I remained unaffected for the most part. But St. Patrick’s Day? Different story. I have always enjoyed St. Patrick’s Day. I don’t know if it’s my part-Irish heritage or my amusement with randomly coloring food items green, but I’m a fan. When I was the sort to go out at night and do things (it’s less than it used to be), St. Patrick’s was something to look forward to. There’s no shortage of good, solid Irish bars around here, and it was fun to watch people fall asleep in their beverage of choice. St. Patrick’s Day celebrations, however spirit-filled, never seems to get quite as out of hand as it’s Mardi Gras counterpart. 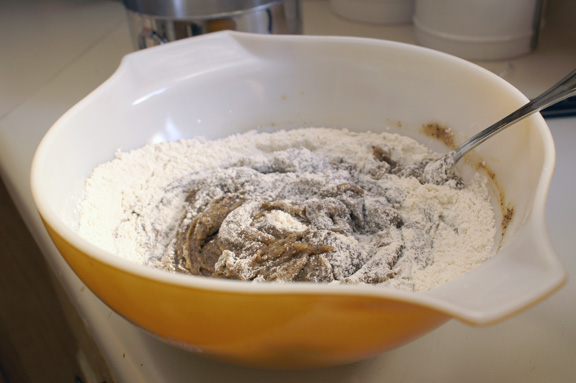 Although I’m not the biggest beer drinker, and generally stick to something slightly lighter than the meal that is Guinness (no offense, Guinness diehards, I simply can not hang, that’s all), I DO enjoy a good Irish coffee every now and again. Very much so. In fact, after-dinner coffee is sort of my thing, with or without alcohol. I think it’s a nice closer to a meal, and I enjoy the finishing touch it puts on the night. When it’s particularly cold or I’m in the mood, a good irish coffee can make my   evening. Don’t worry; I’m not prone to drinking during the day, although you may wonder given some of my posts.

Understandably, when I saw this recipe in March’s Martha Stewart Living magazine, I did a little double-take. Irish coffee blondies? Surely I didn’t read that correctly. But in fact, I did. Reading through the recipe, I had my doubts as to how truly “Irish coffee-ish” these actually tasted. Since the whiskey was only in the icing, would it really taste like one? Or was it one of those gratuitous add-ins which hints at the flavor but doesn’t quite get there? 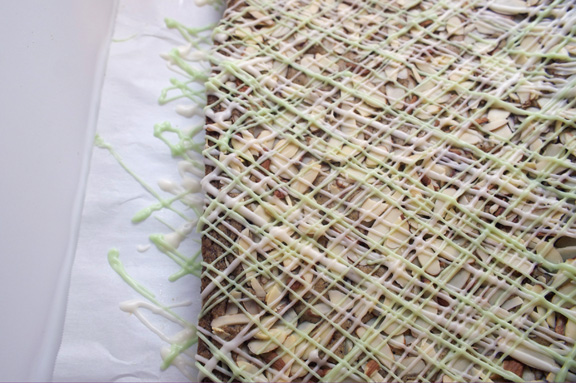 Ignoring her rip on green food coloring in the text (be a sport, Martha, really) I set out to make these. And there’s nothing fancy in these, either. It did seem as though there was quite a bit of coffee in the recipe, but coffee doesn’t scare me, so I went for it. I had been wondering what to do for a St. Patrick’s Day dessert anyway, so, not wanting to go the sugar cookie route again, these deserved a shot. What the heck. Even if they didn’t taste like Irish coffee, they’re probably good. 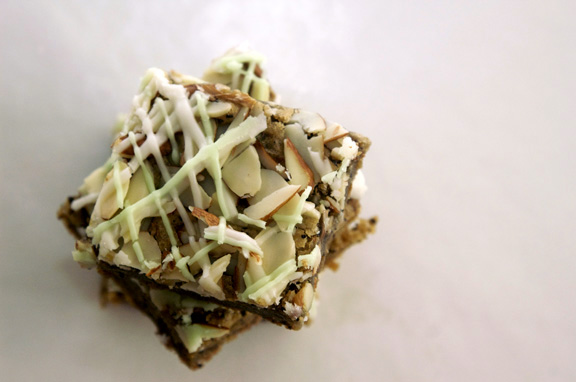 But they do taste just exactly like an Irish coffee. Just. Exactly. I was thrilled. It was one of those moments where you know, you think maybe you’re forcing yourself to think it tastes just like it, but it doesn’t really? So I was excited, but I needed a second opinion. And I know of no one more equipped to handle the “does this actually taste like whiskey-infused coffee” question better than, you guessed it, Mr. Table. You see, Mr. Table is a big fan of the whiskey. He doesn’t drink it much anymore, but in his younger years…well. It’s safe to say he knows what he’s talking about.

The look on his face when he had a chance to experience the first bite or two was priceless. He couldn’t believe it either. No way did I just successfully create a dessert item which tasted like one of his favorite drinks. It was half amazement, half sheer delight. Possibly a 25%/75% split, actually, because the amazement gave way to more delight pretty rapidly. Not only do these soft little squares taste like an Irish coffee, he noted, they would be delicious sitting right next to an actual Irish coffee.

Happy St. Patrick’s Day to you. Here’s to not falling asleep in your Guinness. Maybe if you eat a little something (hint, hint.)

for the drizzle (see note):

In a medium bowl, whisk together the flour, baking powder, baking soda, and salt.

In a large bowl, whisk together the brown sugar and coffee grounds, breaking up any brown sugar lumps with a fork (at least that’s seems to work best for me.) Add the butter and vanilla and mix well. Whisk in the eggs until completely incorporated. Add the flour mixture and stir until ingredients are just incorporated.

Turn into the lined pan and spread into the corners, doing your best to level the batter. Sprinkle the sliced almonds over the top of the batter. Now, I used my entire 1 cup of almonds, and that covers your brownie with a good coating of them. If you’d like a little less coverage, stick to 3/4 cup or so. I always like to have more on hand in case things get clumpy.

Bake for 22-25 minutes, checking after the 20-minute mark. You should have quite the luscious, chewy blondie, which is how I prefer mine. If you prefer a more “done” brownie, leave it in for closer to 25-27 minutes.

Once out of the oven, let cool for 10 minutes or so in the pan and then remove the pan(using a sturdy grip and the parchment lining) and cool completely on a rack.

Use the parchment paper to lift the Blondies to a large flat cutting surface. Use a long sharp knife to cut 2-inch squares.

Note: I doubled the original recipe’s drizzle ingredients because I wanted a) freedom with the icing and b) to split it and add the teensiest bit of green food color to half of it. I didn’t end up using the entire double batch, but I used more than the single. If you like how mine turned out, make a double batch using the measurements above.

Combine the melted butter and Irish whiskey in a medium bowl and whisk together. Slowly add the confectioners sugar, mixing together until it’s the consistency you want. It shouldn’t be runny, but should be loose enough to allow for a good drizzle.

Split your finished icing between two bowls. Color one of the icing portions with one drop of green food coloring or a very (and I mean verrrry) small bit of food color paste. I used food color paste because I prefer that color green to the liquid I have, and think I was successful at not using too much. But be careful unless you’re going for a bolder green.

Using a pastry bag with a plain round tip or use my fancy technique, a plastic zipper bag with a tiny hole cut from one of the corners (it works soooo much better, in my opinion), drizzle the icing in a crosshatch pattern across the entire brownie. Don’t smother it. I used the white first, then the green.

Let the drizzle icing set up at least 1 hour slicing. Using a sharp knife, slice brownies into squares. These are rich, dense brownies; because of that, I employed the sizing I use for my seven-layer bars and cut them in approximately 1 1/2 x 1 1/2-inch squares. You cut them as you see fit. Be sure to keep a damp towel around while you do this so you can wipe your knife periodically; brownies always cut prettier when you’re cleaning your knife.

Blondies can be stored at room temperature up to 2 days. I hate saying how many this will yield because with bars, everyone cuts them differently. If you use my approximately 1 1/2 x 1 1/2-inch cut, you get quite a few.