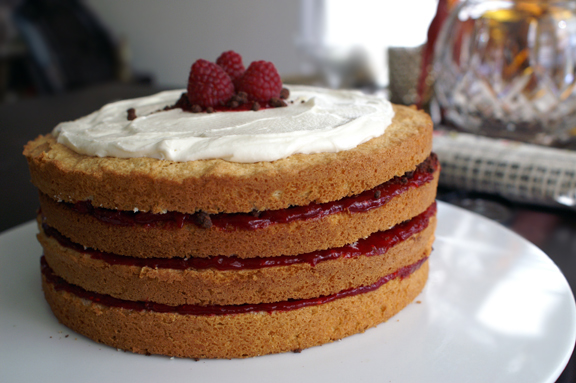 Valentine’s Day takes an awfully big beating for such a little holiday. It seems like most people either love it or absolutely dread the thought of it. I don’t fall into either category; I’m indifferent, I guess. Or more passive about it. I don’t feel the need to have another “gift” holiday while I’m still recovering from December’s Season of Spending (and I have made that abundantly clear to Mr. Table, although he sometimes chooses not to listen to reason), but I do enjoy having a day to break from normalcy and make a nice dinner. with dessert. Maybe even a ridiculous dessert, like a mile-high layer cake.

Let’s be honest: unless you are going to a party, or having lots of people over to celebrate a birthday, layer cakes are a touch impractical. First, there are many things to make with a layer cake. You make the cake, obviously, but then there’s the filling, and also a frosting. Maybe you add a little cookie crumb too, which requires either making from scratch or at least the crushing of perfectly good cookies in a big freezer bag. You could always decide to throw a little ice cream in there, which elevates the layer cake to an entirely different level, both of difficulty and of ridiculousness. But they’re fun, and they’re so pretty, and for Valentine’s day, I couldn’t resist.

This cake has it all; or rather, all except the ice cream, which takes a certain degree of patience which I do not possess. It’s a miracle I made it through the halving of the cake layers. But I did, and this giant cake came off without a hitch. Not one thing (not one thing!) went wrong. It looks semi-difficult, and impressive, but it’s terribly easy. Trust me. Here’s the breakdown: 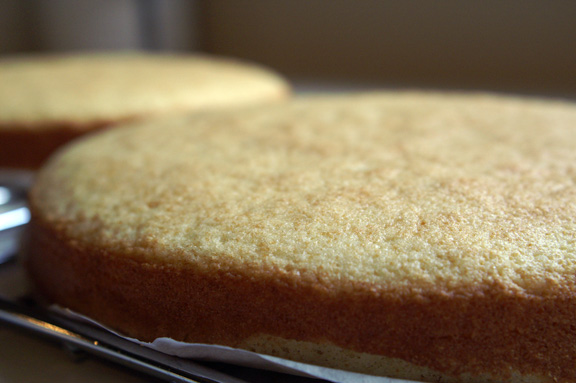 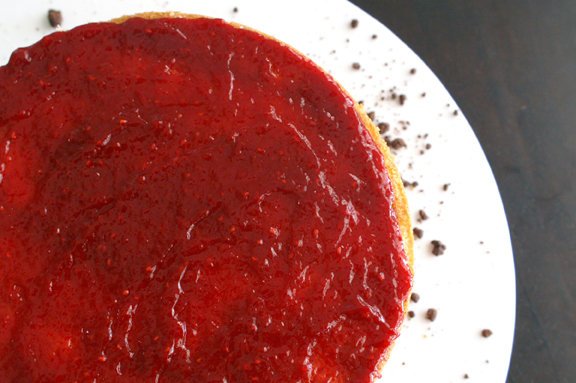 The raspberry filling — a very easy throw-together of frozen raspberries, some sugar and cornstarch, and lemon juice to brighten it up. I strain mine because you really have quite a few seeds when it’s all said and done. it’s a sturdy filling that won’t get runny on you, just be sure to not over-boil it; you don’t want your filling to have the consistency of gummi bears.

The chocolate crumb — I have embraced my obsession with the Momofuku Milk Bar cookbook by now, and have moved from just doing the recipes to using the mother recipes for other things. Like this cake. It’s a from-scratch crumb that’s super easy and adds a really nice texture, and the darkness of this crumb is a nice complement to the white chocolate and the raspberry. 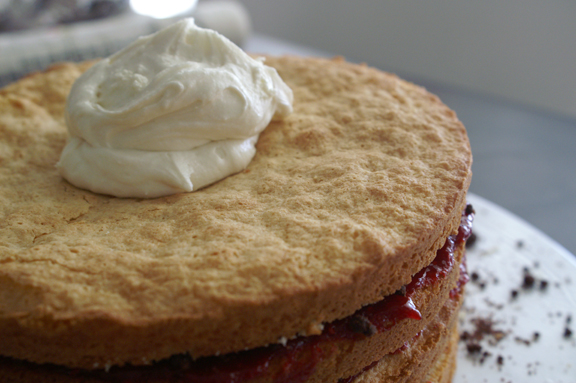 Now: all you need to do is make your stuff, let it cool (cake, filling, and crumb) or chill for a few minutes (frosting) and let your inner pastry chef rip. The only part of this that I thought would unnerve me was the cake slicing. I took my time, and it turned out great. I did what you always hear you should do:

Assemble your raspberry filling, chocolate crumb, and frosting, layer them all up together, and… 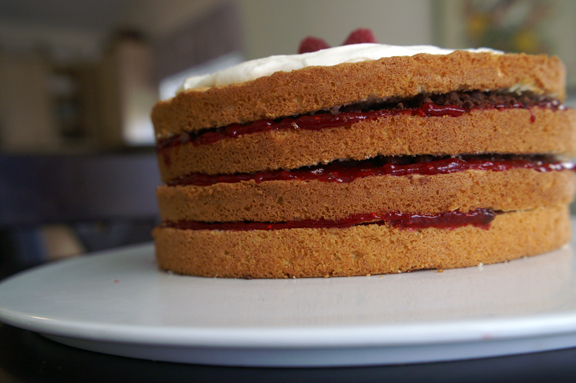 Ta-da! Big fat layer cake! And hey, look at that; no need to frost yourself into oblivion if you don’t want to because it’s beautiful with just the top frosted. Truly, you could omit the frosting altogether and instead, give it a nice little dusting of confectioners’ sugar over the top.

I topped mine with a little bit of leftover raspberry filling, some chocolate crumbs, and a few fresh raspberries. Again, completely up to you how you’d like to decorate. 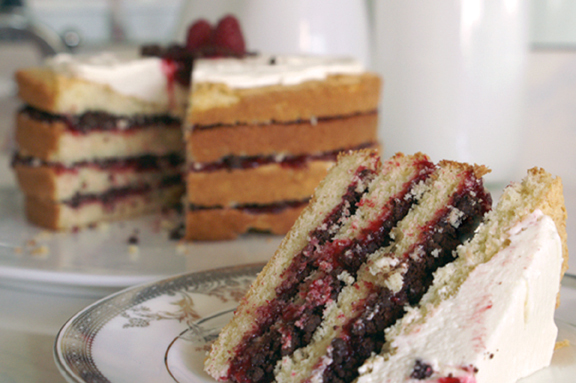 And there you have it: Valentine’s day without the fuss and with a giant cake.

You shouldn’t have any raspberry filling left over but you will have a little bit of chocolate crumb left. Snack on it.

Please, please watch your cakes carefully when you bake them. Over-baked sponge is dry, and sad, and not at all spongy and boing-y as it should be. Please check early and often and remove it immediately when your tester is clean.

I made my things in this order: cake, chocolate crumb, raspberry filling, frosting. That way everything has time to cool before assembly and the frosting isn’t just sitting in the refrigerator for a long time. I will list the recipes in this order.

in a double boiler or heatproof bowl positioned over a saucepan of just simmering water over low heat, melt the white chocolate, stirring frequently. Set aside to cool slightly.

follow the instructions for basic sponge cake up until you mix in the warm milk. After the warm milk addition, fold in your melted white chocolate just as you do the other ingredients, slowly and gently. Once mixed, proceed to adding your flour mixture according to instructions. Make sure cakes are cooled completely before you begin your layers.

for the chocolate crumb:

Combine the flour, cornstarch, sugar, cocoa powder, and salt in the bowl of a stand mixer fitted with the paddle attachment and paddle on low speed until mixed.

Add the butter and paddle on low speed until the mixture starts to come together in small clusters.

Spread the clusters on a parchment-lined sheet pan. Bake for 20 minutes, breaking the crumbs up about halfway through. The crumbs should still be slightly moist to the touch when you remove them from the oven; they will dry and harden as they cool.

Let the crumbs cool completely before layering your cake. You can store these for up to a week in an airtight container, too, so feel free to make these ahead of time.

for the raspberry filling:

Combine all ingredients in a medium saucepan over medium-high heat. Let come to a boil, stirring occasionally. Once it has come to a boil, continue cooking for a minute or so, stirring constantly. Once thickened, set aside (remember, filling will thicken even more upon standing so don’t overdo it on the stove) to cool completely. This is easiest to spread at room temperature, so if you make it ahead and refrigerate it, set it out for a little while to come to room temperature before spreading.

for the white chocolate frosting:

Cream butter in an electric mixer until fluffy, then add vanilla. Add confectioners’ sugar 1/2 cup at a time with the mixer on low speed (to reduce poof factor). Add in melted white chocolate and beat until incorporated. To reach desired consistency, add in milk a little at a time with mixer on low speed. If frosting becomes too liquidy, simple add additional sugar.

A little note regarding quantity: As I said above, if you plan to frost down the entire top and sides of your cake, this is a good amount. If you just want to frost the top like I did? A half-batch will do the job. Like the cake, add the white chocolate or don’t: it’ll taste great either way.

First, see my instructions above about how to cut your layers if you don’t normally do this sort of thing; they reside right before the photo of the finished cake and right after the breakdown of toppings/fillings.

Decorate as you wish.