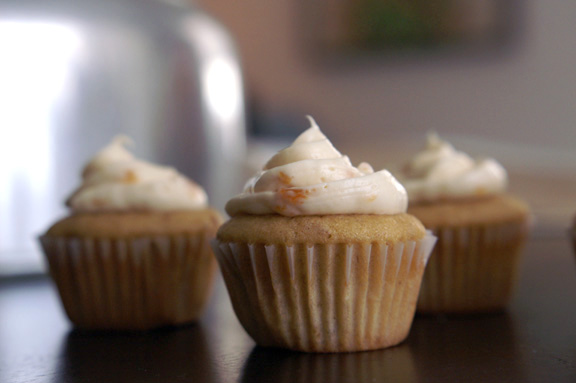 I think I hold the world record for “number of times a grocery list is made and then left on the table.” I love lists. I make lists about everything; what my plans are each day, any appointments I have, what I’d like to accomplish around here every day (sometimes broken down by topic and/or room). It makes me feel better. calmer. like I’m not winging around here forgetting something at one time I deemed important. Lists make me confident that nothing will slip through the cracks of my day.

My favorite are grocery lists. I’ll organize the pantry and fridge, looking over things to see what’s needed for meals and also what’s needed for anything I’m doing for this little blog here. Most of the time, I have the basics. Butter, flour, sugar, eggs? check. Vinegar, oil, spices? check. So I write down what the recipe calls for and I’m off to the races. 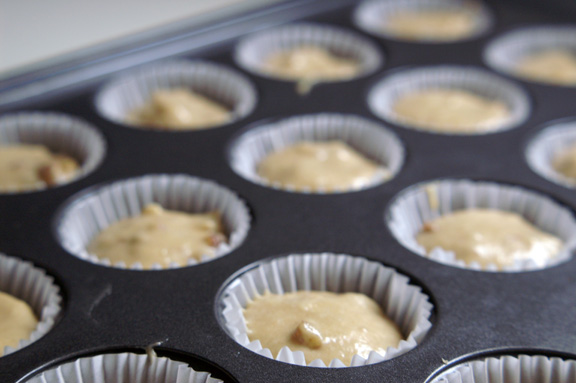 Except it becomes exponentially more challenging when you leave said list at home. I don’t know what sort of day I was having, and I do blame the post-holiday doldrums, but it’s ultimately my fault; I ran out without my list (again!) and I didn’t get enough maple syrup. In fact, I only purchased half of what I needed. It’s freezing here, and I really didn’t feel like going out again. Some tinkering with ingredients was clearly in order. So I sat and thought about what would make these little cakes just as good, maybe even better, than just using maple syrup.

And then it hit me. I could use my christmas presents! My sister, who lives in Nashville, bestowed upon me a huge gift of local food finds this year. They have a fantastic farmer’s market in downtown Nashville, and I fell in love with it. Especially with a jar of dark wildflower honey I brought back with me when I was there in October. As I had been begging her for more jars, maybe cases, of this incredible bee goodness, she took the idea and ran with it, creating for me a Nashville food paradise.

Along with my second big jar of honey was a jar of Loveless Cafe’s apple butter, equally marvelous. Spicy and sweet and perfect on toast, thinking about it made me realize “hey: I can use either/both of these as substitutes for my missing cup of maple syrup.”

And, as luck and Nashville would have it, you can. I substituted a 1/2 cup dark honey and a 1/2 cup apple butter for the 1 cup total maple syrup I was missing. There’s still 1 cup included in the cupcakes, but the honey and the apple butter mellow it out and turn these little beauties into a really subtle cake. The combination of the three infuse it with a muffin-y warmth, like a spice cake without bold spices. They play very nicely with each other in terms of flavor, and give the cakes a flavor that’s almost indescribable (so, very handy when you’re trying to write about them). Chopped pecans in the batter give them a nutty crunch without going overboard. you have to taste them. 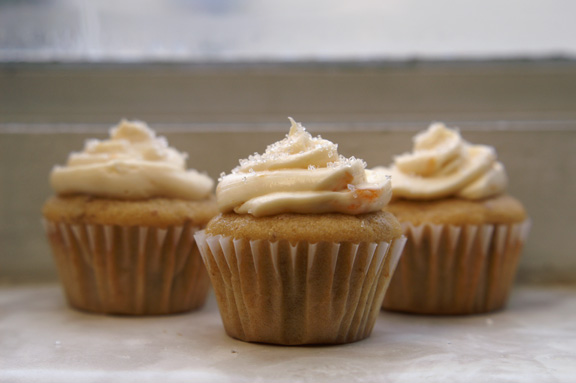 Because these were so utterly breakfast-like, and soft, and had none of that sometimes-cloying flavor you get from using vanilla (vanilla is great, but it carries that drawback at times), I wanted to use a frosting that wouldn’t overpower these. I went with a standby of mine, a basic cream cheese frosting without butter, which works exceptionally well on red velvet and carrot cake. Instead of leaving it plain (for the red velvet) or adding a touch of cinnamon (for the carrot cake), I added a few tablespoons of the dark honey in the cupcakes and a few tablespoons of apricot preserves, chunks and all. whipped together in a food processor, the apricot chunks break down and shine in little bits throughout the frosting without making it look lumpy. 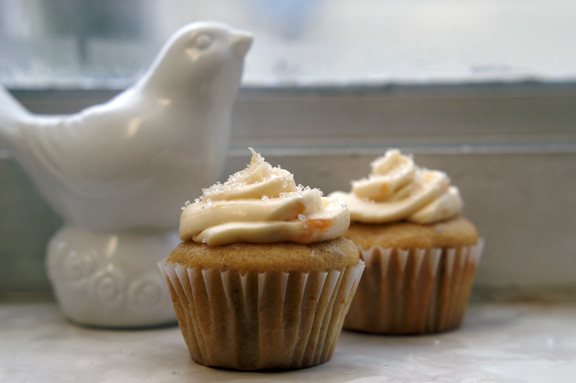 I would honestly eat these for breakfast just as easily as I would for dessert. I know, it’s January and we’re all on diets and shouldn’t be eating things like this and we hate our fat selves and we can’t believe we ate that much over the holidays, I get it. You’re right. But as far as sweet somethings go, this feels good. Not all loud and boisterous, but soft like a cloudy winter morning. It’s ok.

Cupcake recipe adapted from none other than Baked Explorations: Classic American Desserts Reinvented by Matt Lewis and Renato Poliafito. Who, incidentally, are coming out with a new cookbook soon and I couldn’t be more excited. If by some crazy chance they are reading this, I can’t wait for my copy.

Frosting recipe, my own creation. And it really does work well, sans honey and apricots, as a base frosting.

Preheat the oven to 325˚F. Line your muffin tins with paper liners.

In a medium bowl, mix together the flour, baking powder, and salt.

In the bowl of a stand mixer fitted with the paddle attachment, cream butter and shortening together until ribbonlike. Turn the mixer to low and stream in the maple syrup, honey, and apple butter. Increase the speed to medium-high and beat until mixture is nearly uniform in color, about three minutes, scraping down the sides once during the process.

Add the egg yolks and egg, one at a time, and beat until just incorporated. Scrape down the sides of the bowl again. Add half of the flour mixture and mix on low speed until incorporated. Stream in the milk. Stop the mixer, add the remaining flour mixture, then turn back on and beat until just combined. Scrape down the sides of the bowl one more time. Fold in the walnuts.

Fill the prepared cupcake pan about 3/4 full Bake the cupcakes as follows, depending on size:

Bake until a toothpick inserted comes out clean. These are fluffy little things, so let them cool in their pan for about 10-15 minutes, then transfer to a wire rack to cool completely.

Which is so very easy. Beat cream cheese and powdered sugar together until sufficiently whipped and creamy, about 2-3 minutes or so. Add in honey, beat until incorporated. Add in apricot preserves and beat until it all comes together and the apricot pieces are nicely broken down and swirled throughout.  Place in the fridge, tightly covered, until ready to frost your cupcakes.

When it comes to frosting on cupcakes, I am not typically fancy. For these, however, I went to the trouble to cut a small hole in the corner of a plastic bag (pastry bags, forget ’em), added the icing, and swirled the icing on to the cakes in a circular motion. icing them using the normal spread-with-knife method would be fine as well.

I used a little bit of sanding sugar for the tops of these: you can do that too. or you don’t have to, but it gives a nice “ice crystal” effect to them.