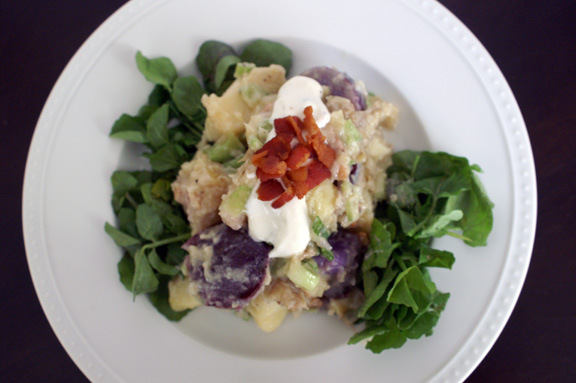 We also have “Aunt Peggy’s potato salad” which is a mustardy, mayonnaisey, american potato salad with eggs and celery and such. It’s what is called for (read: required) at any summer gathering which involves hamburgers or hot dogs. Grandma’s potato salad makes an appearance during the summer, but also at other times of the year, depending on mood.  And that’s how we’re all happy to differentiate things: by Grandma or Aunt Peggy. 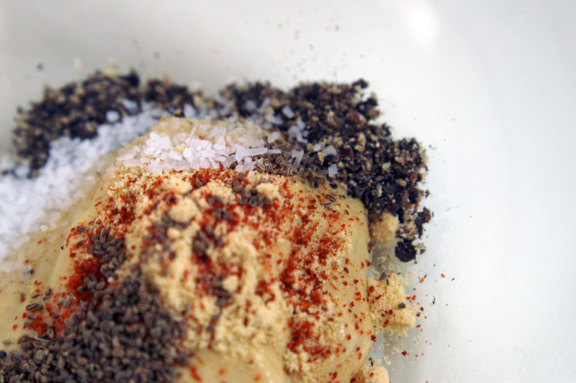 I do not have my own potato salad. I’ve always wanted one. It seems like such an honor, doesn’t it? A whole side dish named after you, generations upon generations of your family saying “mom: can you make great great grandma Shannon’s potato salad?” And I’ve gone in search of potato salad, the potato salad before, and always come up empty. Unfulfilled. Everything I try falling dangerously short of Grandma’s or Aunt Peggy’s mysteriously delicious concoctions. So I’ve trudged on without my potato salad.

Until now. This will be “my” potato salad. I’ve already called it, so no one else can have it. Sure, I’ll give you the recipe. Or, really, I’ll give you Andrew Carmellini’s recipe for potato salad because its technically his. But nowhere in the title does it say “Andrew’s potato salad,” so I’ll go ahead and affix my name to it. Because it is superb. It’s magical. it’s a big fat winner in terms of flavor. and now it’s mine.

There’s something about this particular salad that’s different, and I think it’s all in the way you put everything together. First, you do the potatoes in the standard, very bacon/vinegar soak. That’s where the mustard and spices live also. Then, while your potatoes are soaking up all that flavor, you whip up a horseradish cream sauce to top it with (topped potato salad?!?), which gives you a whole new dimension of flavor. then, as if that weren’t enough, you chop up some celery and scallions to mix in with it as it’s being served. 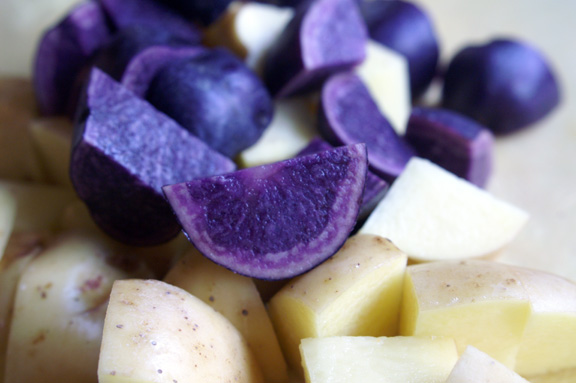 I know! such special treatment for a potato salad. It sound step-filled, but everything comes together so easily. I scrubbed my potatoes, chopped them up, put them in water, and did everything else while they were cooking. First I cooked off the bacon and onions bit to make the sauce, then I whipped up the topping. The only thing I saved until the end was the celery and scallions, because those don’t go on until serving time.

Recipe time! Enjoy. Don’t save this one for summer. I should note that I took liberties with the purple potatoes; you don’t have to use them, but there were some at the market and I couldn’t resist a little color mid-winter.

for the potato salad:

for the horseradish cream topping

scrub your potatoes really well, then cut them into 1/2 inch cubes. Scoop potatoes into a deep, medium-sized pot, and add enough cold water to cover them by about 1 inch. Bring the water to a boil and then cook the potatoes, uncovered, for about half an hour over medium heat, until they’re very soft but not falling apart. mine took about 25 minutes, so I’d check them at the 20 minute-mark.

next, create your potato soak:

Cook the bacon in a large nonstick pan over medium heat until just starting to crisp, stirring frequently to keep it cooking evenly. Once bacon looks like its started to crisp, add onions to the pan. Stir everything around so the onions are coated in the bacony juices and let caramelize, about 4-5 minutes. Stir occasionally so nothing sticks or burns.

Remove pan from heat and pour in the vinegar, broth, and olive oil. Whisk about. Stir in the Dijon mustard, dry mustard, cayenne, celery seed, salt, and pepper, whisking again until everything is combined well. Set aside. Now, check those potatoes! You want potato salad, not mashed potatoes, and there’s a fine line.

When your potatoes are done (but not too done), strain them, being careful not to smash them up. Work slowly and make sure you get all the water out. Spread them out in a big, shallow Pyrex dish (genius! not my genius, sadly) and pour the bacon/onion sauce over it. Put the baking dish in the fridge, uncovered, and let the potatoes cool and absorb the sauce for at least 2-3 hours. I made mine mid-morning and didn’t serve it until that night, and it was fabulous. leave it as long as you can.

combine the yogurt, horseradish, vinegar, olive oil, salt, and pepper in a small bowl. Mix everything together well until it’s smooth. Set in the fridge, covered, until serving time.

Get your potato salad out of the fridge maybe an hour before serving. seem silly? It’s not. i think this tasted so much more awesome when left out for a bit rather than super cold and right out of the fridge. Once it’s serving time, add the celery and scallions and toss all together. At this point, taste-test for seasoning. I loved where i was at with salt, added a bit more pepper, and i was good on vinegar. So, do your thing with it and then transfer to a serving bowl. Top with horseradish cream and add watercress around the perimeter. Better yet, you may have people who don’t like horseradish (although please assure them this is very mild). so leave the topping on the side and let people top as they see fit.