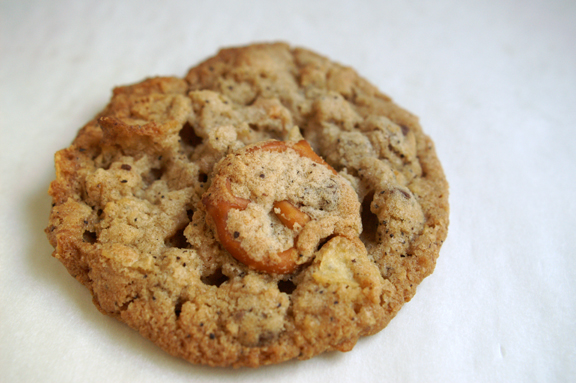 And I thought the cornflake/chocolate chip/marshmallow one was ridiculous. I’m really happy I warmed up with that one from my Momofuku Milk Bar cookbook before attempting this beast; and I mean “beast” in the best way possible. True to its name, this cookie has everything in it. So far, my favorite thing about it is when people ask the inevitable question “sooooo…what’s in this again?!?” and I get to bumble my way through the laundry list of ingredients, testing myself to see if I can name all of them. Most of the time, I forget one. or five.

I’m sad about the name. I’ve heard this type of cookie called all sorts of things: Garbage Cookies, Kitchen Sink Cookies, Leftover Cookies, Pantry Cookies, etc. I’ve never once tried to make them, or eat them. I blame those names. How would one look forward to eating something that sounds like someone just threw a bunch of leftovers together and baked them up? There’s got to be a better name.

Take, for instance, the Seven-Layer Bar. Or at least that’s what I call it. Like the Compost Cookie, it goes by several names, seemingly dependent on geographic region and family tradition. I’ve heard them called Magic Bars (because it’s magic, I guess, to watch the condensed milk do its thing), and I’ve heard them called Hello Dolly Bars (honestly, don’t know where that one came from). I’ve also heard them called Happening Bars, and if you believe what my mother says, it’s because everyone used to look through the oven and yell “what’s happening? what’s happening!?!?” until they were done. 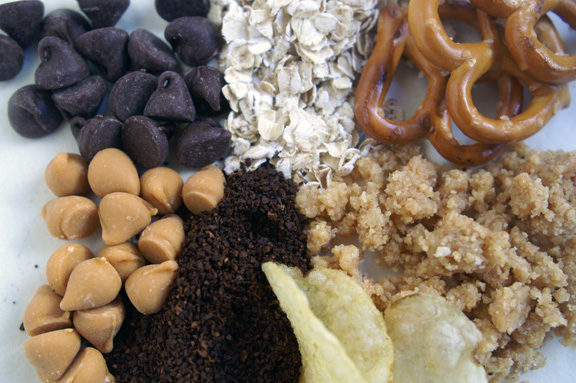 My point here is that the Seven-Layer Bar and the Compost Cookie have similar ingredients and a similar variety of names. The difference? the seven-layer bar names sound exciting. Attractive. Filled with mystery (“what’s happening?!?”) even. Compost/Garbage/Kitchen Sink/Pantry Cookies just doesn’t do these things justice. Someone please tell me if there’s a better name out there that imparts the glory of these round pieces of heaven.

I’ll admit, I was skeptical. Sometimes when any recipe has too much in it, it goes wrong. Not this one. My apologies to this cookie for ever thinking this could be anything but mind-blowingly good. You’ll see the ingredients below, but to summarize, it’s just layer, upon layer, upon layer, upon five more layers of flavor. Most notable flavor? The coffee. DO NOT LEAVE IT OUT. Resist the urge to say “ohhh…coffee grounds? I don’t know about that…” No. add them. you’ll love it. 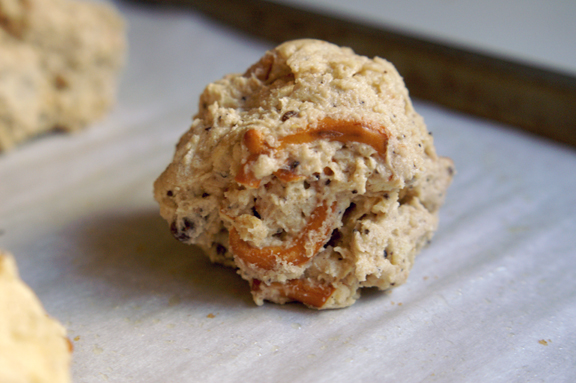 It’s worth saying that these also involve a little pre-recipe of graham crust which gets put in the cookie once done. It’s easy and you’ll have leftovers for eating with your fingers…um, making a crust.

I’m going to refer to my notes from the Momofuku Cornflake + Chocolate Chip + Marshmallow cookie for this one as well. Like that one, I had to alter the bake time and temperature to get the results shown above. I didn’t have the marshmallows to worry about this time, but they do go from perfect to crispy in the blink of an eye. Watch these carefully; it helps to do a trial batch in your oven to see how long you’ll need without going over.

And someone brainstorm a new name for these. They more than deserve it.

Adapted from the new love of my life, the Momofuku Milk Bar Cookbook by Christina Tosi.

ok: i will now create the graham crust:

Toss the graham crumbs, milk powder, sugar, and salt with your hands in a medium bowl to evenly distribute your dry ingredients. I did this for several minutes because once you go butter, you can’t unbutter. Add the melted butter and heavy cream, stirring until everything is incorporated and evenly damp. The crust is ready for your use. If you’re saving it for later, refrigerate for up to 2 weeks in an airtight container.

whoa; that was so easy. time to make cookies:

Combine the butter, sugars, and glucose in the bowl of a stand mixer fitted with the paddle attachment and cream together on medium-high for 2 to 3 minutes. Scrape down the sides of the bowl, add the egg and vanilla, and beat for 7 to 8 minutes.

Reduce speed to low and add the flour mixture. Mix just until the dough comes together, no more than one minute. Do not overmix. Scrape down the sides of the bowl with a spatula.

Still on low speed, add the chocolate chips, butterscotch chips, graham crust, oats and coffee and mix just until incorporated, about 30 seconds. Remove the bowl from the mixer stand and add the potato chips and pretzels, working them gently into the dough using a folding motion. Once they are let’s say, halfway incorporated, put the bowl back into the mixer stand and paddle for a few seconds more until everything looks evenly distributed. It seems like extra work, but I did it to keep the chips and pretzels whole-ish and not crumbly. AND IT WORKED.

Using an ice cream scoop or 1/3 cup measure, portion out the dough onto parchment-lined baking sheet small enough to fit in your refrigerator. Wrap the pan tightly in plastic and refrigerate for at least one hour (I let mine go for three) until firm.

Arrange the chilled dough balls a minimum of 4 inches apart (seems extreme? it’s not) on parchment-lined baking sheets. Bake for 14-16 minutes, watching closely after the 11 minute mark. The cookies will puff, crackle and spread. Take them out when they are just golden-brownish and around the edges and not wet-looking in the middle. If you’re paying attention, you just know when they’re done.

And this is critical: cool the cookies completely on the pans before transferring them to a plate or container or you will have a mess on your hands. Resist. If you want to eat one while they’re cooling (and you will, because the smell is indescribable), go ahead, but know you’ll be picking it off the pan in pieces. So just stand there and enjoy yourself.